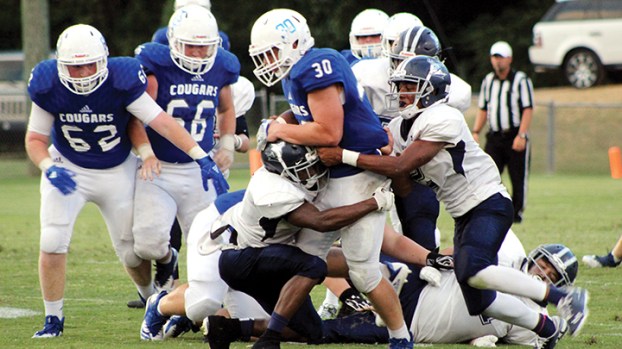 The Mississippi Association of Independent Schools recently approved the athletic districts plan for the 2019-2021 seasons, and the realignment is the most drastic since the association — then known as the MPSA — introduced the AAAA classification in 1996.

Beginning next season, MAIS schools will be divided in football on a scale from 1A to 6A. The two lowest divisions — 1A and 2A — will be made up of eight-man football teams. There will be 12 1A schools that play eight-man football, including Prentiss Christian and Rebul Academy.

The 2A football classification will be made up of the larger schools, such as Manchester Academy, Humphreys Academy and 13 other schools.

The 3A football classification will include 15 schools, and will count Centreville Academy and Amite School Center among its members.

Brookhaven Academy will be among the 17 schools playing 4A football in 2019. The Cougars will be in District 2-4A along with Clinton Christian, Canton Academy and Tri-County Academy. Cathedral and Columbia Academy are also among the teams from South Mississippi in this classification.

The 5A classification in football will include Copiah Academy, Simpson Academy, Central Hinds and 14 other institutions.

The classifications for sports other than football will be different than those for pigskins. The association counted male students in grades 8-11 to come up with the football classification.

“I think this is one of the best things that our association has done in a long time,” said Brookhaven Academy football coach and athletic director Ron Rushing. “I think it creates balance in the football classifications.”

The non-football 5A will be just like the football 6A, except Copiah Academy will replace Oak Forest to join Prep, JA, MRA, Presbyterian Christian and Parklane in the division.

Brookhaven Academy will also be 4A in the non-football division, which is filled out with 21 schools. The Cougars will be members of District 4-4A along with Cathedral, Adams County Christian, Silliman and Oak Forest in all non-football sports.

There are also 21 schools each in the non-football 3A, 2A and 1A classifications.

One issue the association has always had to deal with is the domination of Prep and JA. In 2002, the AAAA classification was divided into a Division I and II to give the other large schools in the association a chance to compete for the state titles the Jackson schools had placed in a stranglehold. Prep or JA have won 20 of the last 22 football championships in the association’s largest class.

That classification system worked well for a time, but was further complicated by the introduction of eight-man football in 2007. The eight-man league was initially a small group of schools that included some of the tiniest schools in the league, such as Tallulah Academy and Tensas Academy, both of Louisiana.

In recent years, as high school football participation numbers have seen a decrease all over the nation, more schools started to drop down to play eight-man football, sometimes with little or no warning due to their low number of players.

Brookhaven Academy played Claiborne Academy (Louisiana) in 2017, but then had to replace them on their 2018 schedule when they dropped down to eight-man football.

Brookhaven Academy baseball coach Tyler Parvin sees a stacked 4A classification when he looks at the new home for his Cougars. Included in the 4A class is Magnolia Heights, a team that won the AAAA Division 2 championship last season.

“District-wise it won’t be much different, but on the state level it’s going to be tough,” said Parvin. “We’re the smallest 4A school.”

Softball coach Becky Flowers sees the new classification as a challenge of the good kind.

“Enrollment is up and playing in a larger classification is something that comes from the good things that are happening at the school,” said Flowers.

While enrollment has increased at BA, a decrease at other schools also plays into the shift for the Cougars.

“It’s not just about our numbers going up, but you’ve also got to factor in other schools that saw a decrease in students,” said BA boys’ basketball coach Josh Watts. “I know Columbia and Bowling Green (two schools that are now 3A non-football) both went down from the last count. If that didn’t happen, then we’d likely be in the lower classification.”

The Cougars were members of the old AAA classification for two years between 2015-2016. Watts remembers how his team grew into contenders in the second year after taking their lumps in the first year.

“We moved up to AAA for a time and that first year we took some whippings, but in the second year we had adjusted and grew as a team,” said Watts. “We know from that experience that there is a definite step up in competition when you move up a division, but you can’t cry about it. You’ve just got to work hard to improve and compete.”

In 2017, the Cougars won AA state titles in girls’ basketball, boys’ basketball and baseball, along with a state title in archery. In 2018, they have already finished state runners-up in fast-pitch softball and are in the quarterfinals of the state football playoffs.

Gabe Burnett saw his team needed him on Friday night at South Jones. A sophomore running back, Burnett stepped up... read more