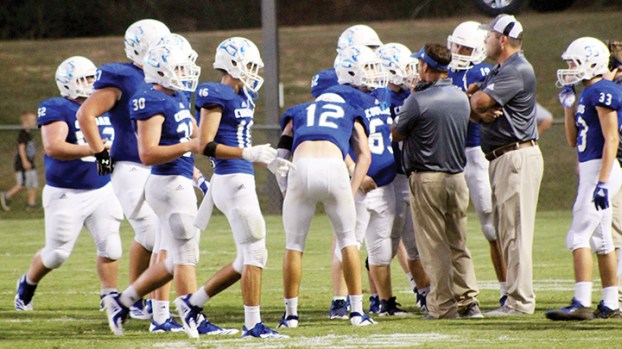 Photo by Cliff Furr Brookhaven Academy head coach Ron Rushing and assistant Jaymie Palmer address their team in the first half against Clinton Christian. The Cougars host River Oaks School out of Monroe, Louisiana, tonight in a MAIS AA second round playoff game.

BA hosts River Oaks in round 2 of playoffs

Last week, Brookhaven Academy made it past the first round of the MAIS playoffs for a second consecutive season with their 48-13 win over Marshall Academy. Friday night, the Cougars (8-2) have their eyes set on making it to the semifinals when they host the River Oaks (Louisiana) Mustangs (6-4).

For a team that had a 24-game losing streak just 14 months ago, BA head coach Ron Rushing hopes the fans and supporters of the school know just how special Friday night is.

“Last year we broke the longest losing streak in the state and Friday night we’re hosting a quarterfinal game, and it’s all a credit to our kids and how hard they’ve worked,” said Rushing. “I hope our fans show up and give these guys the kind of support they deserve.”

River Oaks — located in Monroe — is led by longtime head coach Robert Hannah. Hannah became the head coach at River Oaks in 1994 after being hired as an assistant there in 1985. His teams won state championships in 2005 and 2010. That 2010 team beat Brookhaven Academy 17-14 in the state semifinals.

“They’re a classic River Oaks team,” said Rushing. “Very disciplined and fundamentally sound. They’re not going to beat themselves. They’ll run the ball out of the I-formation and wait for you to make the first mistake.”

While Cougar quarterback Dawson Flowers has had a dip in his numbers this season — 16 touchdowns in 2018 versus 26 last season — the senior signal caller has seen his team grow their passing game as the year has progressed. Expect the usual suspects of Flowers, wide receiver Cade Brown and running back Nick Ogden to drive the Cougar offense from the skill positions.

The Cougar defense has been led all season in tackles by junior Gunar Brister. Seniors Cole Griffin and Keegan Smith are also Cougar defenders that are quick to the ball. It will take a team effort for BA against an opponent that isn’t going to get flashy in their game plan.

“River Oaks plays a physical style of football,” said Rushing. “We’ll need to match that on the defensive side and be fast to the ball all night.”

The Loyd Star Hornets (7-3) will be facing a program steeped in tradition when they host the Mize Bulldogs (3-8)... read more