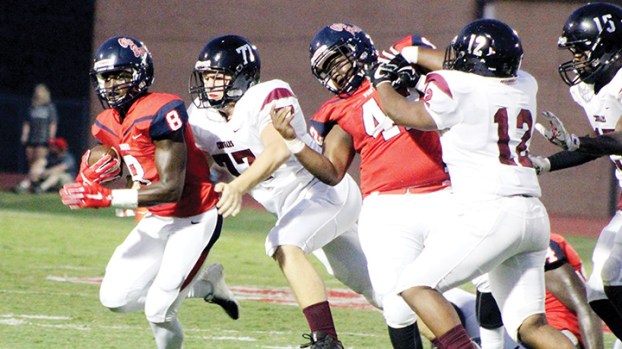 Photo by Cliff Furr Above: Brookhaven High kick returner Byrion Robinson looks for room to run against Lawrence County. Robinson has a team leading 487 return yards in 2018 and has made team high seven tackles for a loss as a defensive back. Below: Sevante Quinn tries to avoid a tackle.

Much on the line for BHS Friday night

The Brookhaven High Panthers (7-3) face a long-time nemesis Friday night when they host the West Jones Mustangs (8-2) on King Field.

The two schools have been members of the same football region since 2009, but met several times in the playoffs prior to becoming division mates.

The 2004 playoff meeting between the two saw the Panthers beat the Mustangs 28-14 on their way to the 4A state title. In 2007, West Jones eliminated Brookhaven 30-7 in the opening round of the 5A playoffs. The next year the Mustangs would again bounce Brookhaven — this time in the second round — by beating the Panthers 17-7.

The 2010 loss is one that probably still sticks in the crawl of Mustang fans. Their team was unbeaten and had blasted BHS 31-0 in the regular season. The Panthers gained revenge in the south state championship game, as they held off the Mustangs 27-26 on King Field.

That 2010 West Jones defense isn’t much different from the one that head coach Scott Pierson brings to Brookhaven Friday night. The Mustangs are always going to fly to the football. Pierson has been the head coach at West Jones since 2002.

Brookhaven has won three straight games in the rivalry, and West Jones had taken three in a row previous to the Panther streak.

West Jones has scored 30 or more points in all but three games this season — two of them being losses. They are typically balanced, as the Mustangs are most years, averaging 140 yards on the ground and 122 yards through the air each game.

Sophomore quarterback Alan Follis has thrown for 874 yards and 10 touchdowns in 2018. West Jones runs the ball by committee, with the top two carriers being juniors Michael Neal and Jasper Jones. Neal has run for a team-leading 518 yards, while Jones has scored a team high six rushing touchdowns.

The Mustang defense has caused 20 turnovers this season and is led by a ball hawk at safety in senior Antonie Kirk. Kirk has picked off five passes to go along with his 21 tackles this season.

Senior defensive end Byron Young is the player the Panthers will have to work hardest to slow down. The 6-foot-4, 285-pound Young is committed to the University of Alabama. Young has been selected to participate in the prestigious All-American Bowl all-star game and has 9.5 sacks this season and has made 65 tackles.

A win Friday night could jump the Panthers into second place in Region 3-5A. A loss would leave Brookhaven as the four seed when the playoffs begin next week.

It’s also senior night for a group of Panther players that is a combined 26-9 since their sophomore seasons.

Kickoff on King Field between the Panthers and Mustangs is slated for 7 p.m.

BA hosts River Oaks in round 2 of playoffs

Last week, Brookhaven Academy made it past the first round of the MAIS playoffs for a second consecutive season with... read more