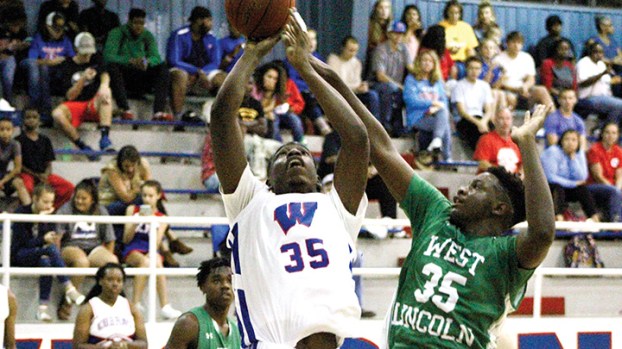 Wesson made its home debut in The Snake Pit on Tuesday night, as they ran out to an 86-57 win over the West Lincoln Bears.

With his two leading scorers returning for their senior seasons, Wesson head coach Rusty Newman is hoping to take his team back to the MHSAA 3A state playoffs after missing out the last two seasons.

In senior guard J.D. Allen, the Cobras return a long-limbed wing that has a quick pull-up jump shot. Allen averaged a team-best 18.9 points per game for the 2017-2018 team that finished 13-14. On the other wing, he pairs with senior Shemar Dickerson, who averaged 17.9 points per game last season. Dickerson is small and quick, and uses his first step to beat defenders to the basket. That leads to Dickerson often going to the free-throw line.

Allen scored 22 on Thursday, and Dickerson chipped in 13 points.

Next season, this game will be a division matchup, as the Cobras drop down to join a 2A region that will be made up of West Lincoln and their county school brethren.

On Thursday, the Cobras jumped out to a 21-13 first half lead. In the second period, West Lincoln saw junior point guard Anthony Hughes get hot from deep and pull his team closer to the Cobras. Hughes hit four consecutive three-pointers to cut the Wesson lead to 36-32 and force Newman to call a timeout. Hughes would finish with 14 points in the game.

When Wesson needed a basket Tuesday, they went inside to muscular senior forward J.T. Smith. That’s a luxury Newman didn’t have last season, as Smith missed the year as he recovered from a knee injury.

On Tuesday, Smith was a bully on the block, as he rebounded balls outside of his area and made life difficult down low for the Bear defense. Smith finished with a game-high 25 points.

Wesson led 43-34 at halftime. Late in third quarter, West Lincoln went on a run that cut the lead to eight. Wesson would then answer with a long three-pointer by Allen, a rebound and layup by junior forward Kenner Bizot, and a layup by Allen on which he would get fouled and then make the subsequent free throw. In less than 60 seconds the lead had gone from eight to 16 for the Cobras.

With Smith on the block, the Cobras have a nice compliment for high-low action that Bizot can direct from the elbow. Junior Darrian Gibson is a big-bodied guard that brings the ball up and serves as the de-facto point guard for the first unit. Senior Ahmaad Harvey is a versatile piece for Newman that can play inside or out. Junior guard Damien Smith and senior guard Victavian Edwards are two strong former football-playing subs that are among the first players off the bench for Wesson.

The Cobras have the ability to shoot teams out of trying to guard them with a zone defense. As good as things have gone early, with the win Tuesday night and a 65-30 win over Mendenhall last Saturday, Newman knows that Region 8-3A play will be ultra-competitive, as always.

“Jefferson Davis County won 20 games last year and I expect them to be strong again,” said Newman. “Columbia finished behind them in district and they’re always going to be tough. We’ve got room for improvement, but I thought we played hard tonight. JT has a high motor and it was great to see him back out there after not having him last season.”

For the Bears there is plenty of time to improve on their opening-night effort. Head coach Brooks Smith, for one, looks forward to having some more time on the practice court with his team.

“We’ve had our whole team together for one practice and then we played today,” said Smith. “We’ve got some guys that just got off the football field and it will take them a little time to get adjusted.”

In junior post player Keshon Byrd, the Bears have the largest interior presence they have had in quite some time. Byrd is over 6-foot-3 and has touch around the basket. On Tuesday, he got in early foul trouble with three in the first half and fouled out of the game in the second half when the outcome had already been decided.

Senior guard Jatavian Lewis came off the bench to lead West Lincoln with 19 points. Lewis, Hughes and senior guard Garrison Coffey fit the mold of the prototypical West Lincoln guards who have a green light after they cross half court. Smith says the team is still trying to develop who fits into what roll.

“We’re going to get better as we work together in practice and figure out what lineups work best,” said Smith. “Against a good team like Wesson, you’ve got to focus on every possession. We had some good moments tonight, but we hurt ourselves with some lack of communication.”

West Lincoln finished 16-12 last season in the first year on the job for former Bears assistant Smith. He took over the boys’ and girls’ programs when Lane Young left for a position at Copiah-Lincoln Community College. The Bears made the second round of the playoffs before losing to Bay Springs last season.

Lady Bears double up on Wesson

The West Lincoln Lady Bears opened their season on Tuesday night with a 62-31 win over Wesson on the road.... read more