Funeral services for Julius Edward “Peck” Vaughan, of Brookhaven, are Friday, Nov. 9, 2018, at 11 a.m. at Macedonia Baptist Church with burial at the church cemetery. Riverwood Family in Brookhaven is in charge of arrangements.

Mr. Vaughan, 96, died Wednesday, Nov. 7, 2018. He was born Feb. 5, 1922, to Thomas and Celia Vaughan. As a baby he had colic and his older sisters nicknamed him “Peck”, from the book, “Peck’s Bad Boy.” He went to Friendship school from Primary to seventh grade, and from eighth through 12th went to Loyd Star, where he met his high school sweetheart, Agnes Verlyn Smith. In November of 1942, he enlisted in the United States Army and he was a member of the Battery C 755 AAA Gun Battalion.

During his stay in the South Pacific, he bought an engagement ring and mailed it to his sweetheart and asked her to marry him in a letter, since there were no phones to call home. He was honorably discharged on Nov. 12, 1955, and wed Verlyn two weeks later. They were married for 58 years before her death in April of 2003, and to this union God blessed them with five children.

He was an active member of his community and church. He was Deacon Ameritas at Macedonia Baptist Church, chairman of Lincoln County Southern Baptist Brotherhood, and supervised numerous houses and church buildings and went on many mission trips. In the community, he was Chairman of the Buildings Committee with Habitat for Humanity, he was a Golden Deeds recipient and he was elected Citizen of the Year in Lincoln County in 1998. Also, in 1998 he was honored as an Unsung Hero. One of the most memorable acts in his life is the work he did building wheelchair ramps, numbering 248 to date.

He is preceded in death by his beloved wife, Verlyn Vaughan; parents; infant daughter, Deborah Vaughan; one brother; and his sisters.

The family would like to thank Hospice Compassus, Silver Cross Health and Rehab Center, King’s Daughters Medical Center, and his caregiver, Mrs. Pat Newman for their care and compassion during our father’s illness.

We would especially like to thank “the boys” at Riverwood for loving him and including him in every part of the business. In lieu of flowers you may make memorials to Nanny Verlyn Vaughan playground fund at Macedonia Baptist Church.

“For God so loved the world that He gave His only begotten Son, that whosoever believeth in Him should not perish, but have eternal life.” John 3:1

Condolences and other information are available online at www.riverwoodfamilycom. 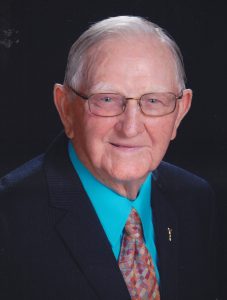