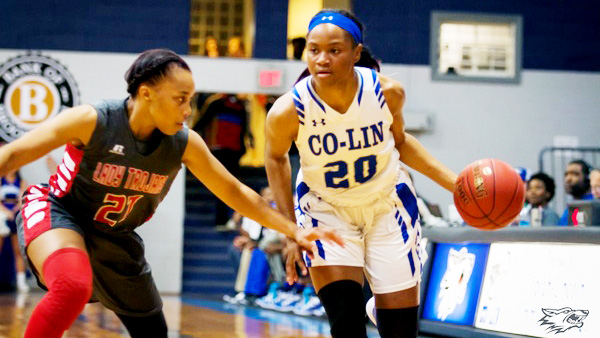 Lady Wolves move to 2-0 on year

It was a team effort Monday night as the Lady Wolves defeated the Lady Trojans of Mississippi Delta 89-63 in the 2018-2019 home opener. Co-Lin had five players, Sha’Quandra Carter, Camryn Davis, Dashell Davis, Tamara Riley, and T’Kyra Hicks, score double-digits in the win.

“I thought we were pretty good offensively in the first half,” said head coach Gwyn Young. “Defensively we let them shoot a little too good as they shot 43 percent…in the second half our guards and post players and we got some steals, but I think we had upper hand in several categories. We had a bunch of people play really well tonight.”

The Lady Wolves scored early and often against the Lady Trojans and led 15-5 just five minutes into the contest. Delta went on a brief offensive run and cut that 10-point lead down to just four late in the first period, but Co-Lin recovered and stretched back to double-digits with 8:02 left in the second and maintained a double-digit lead for the remainder of the game.

There were several spurts of very solid offensive play from Co-Lin including a 12-2 run that lasted for the entire second half of the third period. Co-Lin stretched lead to 30, the largest of the game, with 4:31 left in the contest, despite playing a slightly more conservative offense.

Shammia Love led the Lady Trojans with 21 points as she went 5-of-12 from three-point range. Patrisha Lollis posted seven rebounds, while Celentria Rice had six steals.

The Lady Wolves out-rebounded the Lady Trojans 57 to 38 and shot 43 percent to Delta’s 35. The Lady Wolves were also 6-of-19 from three-point range for 32 percent.

“We’d like to play of course rather than have this long break, but we have some things we need to work on and get better,” said Young. “We need to be ready, we can’t underestimate anybody.”

The Bogue Chitto Bobcats were swept in their season-opening hoops doubleheader on Saturday at home. In the girls’ game, the... read more