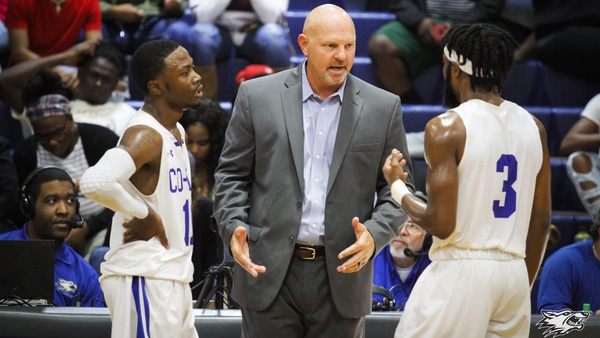 Wolves get first win of season

The Copiah-Lincoln Community College Wolves picked up their first win of the 2018-2019 season, an 84-76 win over Mississippi Delta, on Monday night after two 18-point performances from Cameron Woodall and Damarius Brooks. Miles Daniels also had a stellar game as he poured in 16 points while Xavier Heidelberg chipped in 10.

“We had a drought in the first half but we fought through that,” said coach Kenny Bizot. “We had balanced scoring and had some big rebounds. Woodall is still trying to fill out his talent, but he has a lot potential, we expect him to have 10 or 12 rebound games.”

Co-Lin did not struggle to find the basket early as the Wolves made seven of their first eight shots and quickly grew a lead to 11 points, 21-10. Delta responded quickly with a 6-0 run from back-to-back three-pointers from Quintaures Boatman and Avion Graham and snapped the Wolves back into high gear.

Both teams traded baskets over the next eight minutes and a 7-0 Trojan run late in the first half knotted the game at 30-30. The lead changed hand four times over the next two minutes as both teams continually drove into the paint. A three-pointer from Dajon Whitworth broke the routine and put Co-Lin on top by four. At the half, the Wolves led 44-41.

Delta made a push early in the second half and cut the lead to just two, 54-52, but once again the Wolves slipped by to stretch the lead. In the final five minutes, the Trojans made one more offensive effort with an 8-0 run in just a minute and a half. The quick burst tied the game for the fifth time at 74-all. Woodall broke the tie with a pair of free throws and Daniels added a layup quickly after to help Co-Lin hang on to the lead.

Co-Lin is back in Mullen Gymnasium Thursday, as the Royal Ambassadors travel to Wesson for a 7 p.m. tip.

“We are going to prepare for Thursday just like any other game. I hope we come in ready to play and get some more guys some more minutes. We are still trying to figure things out, but that makes this win over Delta a good win.”

Lady Wolves move to 2-0 on year

It was a team effort Monday night as the Lady Wolves defeated the Lady Trojans of Mississippi Delta 89-63 in... read more