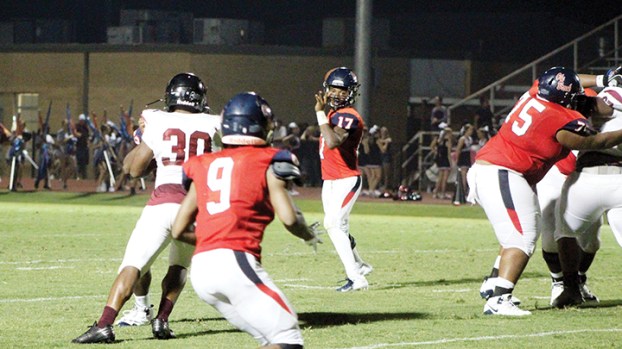 The Brookhaven High Panthers are headed to Forrest County Friday night for the opening round of the MHSAA 5A state playoffs as they attempt to do something that hasn’t been done by anyone this season — beat Hattiesburg.

The story of the resurgence going on within the Hattiesburg football program is one that has been well documented this season.

Head coach Tony Vance was hired away from a successful program he built at Charleston High School in the Mississippi Delta. Vance was taking over a Hattiesburg team that had gone through three coaches in three seasons and had been an average program for some time.

Since a 4-8 record in his debut season, Vance has built Hattiesburg up with gains each year. Last season, they went 14-1 and lost to West Point in the 5A state title game. In 2016, the Tigers eliminated Brookhaven 42-14 in an opening-round playoff game.

This season, the Tigers have been dominant, as the closest any of their games has been was a nine-point win over Petal in their opener.

As the program has grown, so has the quality of student athletes that Hattiesburg is sending to the next level.

Jaren Handy, a 6-foot-5, 278-pound defensive end, is committed to Auburn and has offers from every school in the SEC. Safety Hakeem Vance is a Baylor commit after turning down schools such as Georgia and Kentucky to pick the Bears. Quarter back/running back Jarod Conner is committed to Memphis, but recruiting rumors say he may eventually flip to Ole Miss. Running back Drexlan Allen is committed to Florida Atlantic and cornerback Jadarius Perkins has pledged to stay home and play for Southern Miss.

Conner leads the Tiger offense with a combined 3,284 yards of total offense in 2018. He’s thrown for 23 touchdowns and rushed for an additional 22 scores. Connor was named Class 5A Mr. Football by the MHSAA on Wednesday.

Allen has rushed for an additional 1,022 yards and 16 scores. Receiver Darius Ruffin is the leading pass-catcher with 1,021 yards and 13 scores on 49 catches. Ruffin averages a whopping 20.8 yards per catch.

The Tiger defense gives up just 14 points per game.

Brookhaven head coach Tucker Peavey knows what it takes to take a team on the road as an underdog and win in the playoffs. That’s exactly what the Panthers did in 2010 when they went to 10-1 Long Beach and shocked the Bearcats with a 23-21 win. BHS rode that wave of momentum all the way to the 5A state championship game.

BHS is coming off a tough 24-20 loss to West Jones. The Panther defense held the Mustangs to 55 yards rushing and made West Jones attempt three field goals on promising drives that ended when the BHS defense buckled down. Panther linebacker Wesley Calcote picked off a Mustang pass and safety Isaiah Wall returned a blocked field goal for a touchdown.

Late in the game, Brookhaven had a final chance to take the lead, but West Jones ended the drive with its second interception of the night.

Peavey was proud of the effort and grit his team showed against a good West Jones team. He expects more of the same Friday night from his Panthers.

“Hattiesburg is talented in every position,” said Peavey. “If ever a team was worthy of being ranked number one it would be them. Our effort and execution are going to determine if we’re in the game late.”

The Panthers are aware of the upset their school sprung on Long Beach in the past. They also know the pressure is on undefeated Hattiesburg, as they are the overwhelming pick to win the 5A state championship on Dec. 1 at M.M. Roberts Stadium on the campus of Southern Miss.

“When you’re going on the road and playing a favored team, you’ve got nothing to lose,” said Peavey. “We can’t turn the ball over and we’ve got to take our opportunities when we get them. When you’re lining up across from a talented team the only choice is to get after them and show how hard you can fight on every play.”

When the regular season ended, and the seedings came out for the MAIS playoffs, there were surely some Brookhaven Academy... read more