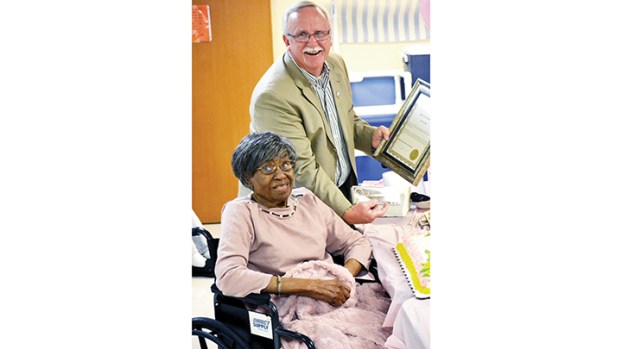 Photo by Donna Campbell Mary Ella Caston celebrated her 100th birthday this week at Countrybrook Living Center by receiving the key to the city, a proclamation and of course, cake. Pictured are, from left, Caston and Ward 5 Brookhaven Alderman Fletcher Grice.

Centenarian says the key to living to 100 is Jesus

The Liberty native spent the majority of her life growing her own vegetables and canning them to provide for her husband and eight children. When the kids were older and out of the house, she worked for the Mississippi State Extension Service, teaching others how to garden and preserve.

Mary Caston’s secret for making 100 years is based on her upbringing in church.

“Give the Lord the chance when he has it,” she said. “You can’t come back and get it.”

Caston, who turned 100 Monday, will be celebrated at a public party Saturday at 1 p.m. at 124 North First St. in Brookhaven. She’ll also be honored at services Sunday beginning at 9 a.m. at Beulah Chapel Missionary Baptist Church. Her granddaughter, Minister De’Anna Michelle Caston of Detroit, Michigan, will be the guest speaker at the church service.

Mary Ella Caston was born to Willie and Rosie Powell the day after actor Art Carney and two days before evangelist Billy Graham. It was the same year Daylight Savings Time was enacted and World War I ended. Woodrow Wilson was president and a half gallon of milk cost 28 cents.

She spent 54 years of her life married to Rev. James Caston, choosing to remain a widow after his death. After she retired, she’d travel to Brookhaven often to visit her children who lived there — Charles Caston, Maxine Battles and Ella Rose Bowman.

She liked to take the scenic route from Liberty up Old Highway 51, Charles Caston said.

She moved to Lincoln County 11 years ago and she’s been at Countrybrook Living Center for nearly two years, where she is known for being joyful and prayerful. The staff surprised her with a birthday party there Monday and Brookhaven Ward 5 Alderman Fletcher Grice presented her with a proclamation and a key to the city.

And, of course, there was cake.

Angela Jordan is the office manager at Countrybrook and is assigned as Caston’s ambassador. That means she checks on her throughout the week to make sure she’s content.

“Miss Mary, she is one of the most positive little ladies I’ve ever met,” she said. “Every time I go in that room, I always feel better when I come out. She always says, ‘God bless you.’”

Caston keeps a written record of her visitors and insists that people sign their names before they leave.

Caston said she smiles because she’s had the Lord in her heart since she was a young girl. She wanted that for her own children.

She never drank or smoked, but can’t resist a good dessert.

She believed in spanking unruly children and telling the truth. She taught them to do their best, follow through, be polite and do what’s right.

“When other people are doing other things, I try to do the right thing,” said Rev. Charles Caston, who has been the pastor at Beulah Chapel Missionary Baptist Church for 29 years.

The only suspect in the murder of two Brookhaven police officers has returned to prison after a more than two-week... read more