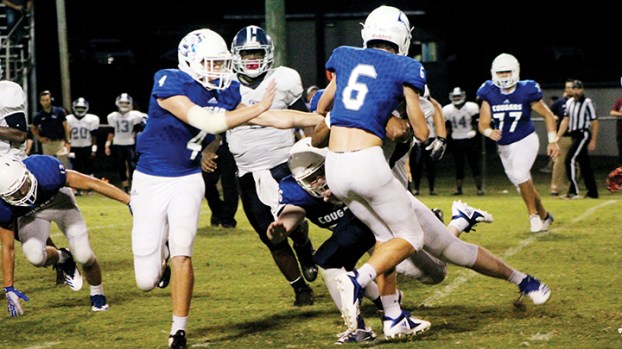 Photo by Cliff Furr Brookhaven Academy defenders No. 4 Trey Fortenberry and No. 6 Tyler Fortenberry work together to take down a Clinton Christian ball carrier with help from defensive lineman Caleb Carithers. Tonight the Cougar defense is facing a St. Joe team that features two highly ranked skill players in their backfield.

When the regular season ended, and the seedings came out for the MAIS playoffs, there were surely some Brookhaven Academy fans who had hoped the Cougars would be seeded third.

That would have put them on the opposite side of the bracket from the top seeded Greenville-St. Joseph Fighting Irish. That didn’t happen, and now the No. 4 Cougars are facing the No. 1 Irish in the MAIS AA semifinals.

If the Cougars are to win the AA state championship they have always known they would have to beat St. Joe — regardless of it was to come in the semifinals or the finals.

Friday night, the Cougars (9-2) will see if they can complete that task when they travel to Washington County in the Mississippi Delta to take on the Irish (10-1). St. Joseph is the defending AA state champions after beating Tri-County 44-14 in the championship game last season. In 2017, they finished 12-2 and their lone loss this season came in week two in a 42-14 beating by Indianola Academy.

The challenge for BA isn’t hyperbole or exaggeration. The Cougar defense must try to slow down two of the most explosive underclassmen in the state.

As a sophomore at MHSAA 2A school Greenville-O’Bannon, Benson ran for another 1,800 yards, 18 touchdowns and again averaged 14 yards per rush. Benson has an offer from Memphis but has seen his recruitment by Ole Miss pick up as of late.

And as crazy as those number are, Benson isn’t even the most highly sought-after player on the team. That designation belongs to quarterback Dillon Johnson.

Johnson has thrown for 738 yards and nine touchdowns while rushing for 1,339 yards and 14 scores. He’s being recruited as an athlete and could play on either side of the ball in college.

Johnson is nationally ranked as the No. 241 best player in the class of 2020. At 6 feet tall and 170 pounds, Johnson has offers from Mississippi State and Ole Miss, and interest from several other SEC schools.

With Johnson in the shotgun formation and Benson standing beside him, the Irish present a formidable challenge to slow down.

One way Brookhaven Academy head coach Ron Rushing hopes to do that is for his players to meet at the ball on every play. The Cougars must fly to the football together and gang tackle better than they have all season. The defensive line must refuse to be blocked and the linebackers must be physical and wrap up on every tackle.

St. Joseph was opened in 1950 and didn’t join the MAIS until the 2015 season. St. Joseph, Cathedral and St. Aloysius joined the league after the MHSAA banned out-of-state students from participating in all sanctioned sports and activities. At the time, St. Joe had around 50 students that lived across the Mississippi River in Arkansas.

When they were members of the MHSAA, the Fighting Irish were classified as a 1A school and have been coached by John Baker since the 2009 season.

The field conditions will also be a factor in the game Friday night.

“They’ve had rain every day this week,” said Rushing. “Clinton Christian said their field was in rough shape last week and it’s gotten soaked since then. We tried to move it to play at Delta State but they had a conflict and couldn’t host.”

With a forecast that has temperatures in the 30s and steady rain throughout the day, Rushing says whoever handles the elements best will be a deciding factor in the game.

The winner between BA and St. Joe will moves on to play the winner of Centerville and Sylva-Bay Academy. The AA state championship is scheduled for 2:30 p.m. on Nov. 17 at Jackson Academy.