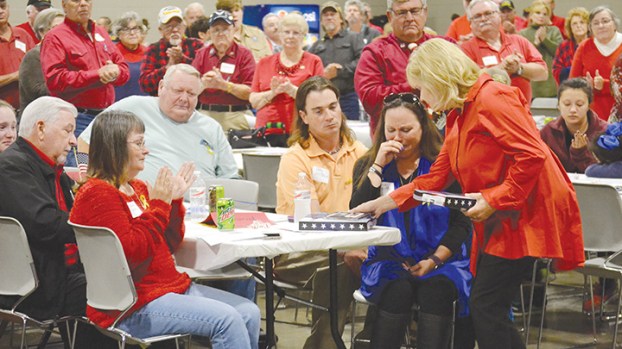 ‘How will I be remembered?’ — honoring veterans

Lisa White choked as she read her brother’s words, written some time before he left on a police call and never came home.

“How will I be remembered by my friends, my family and my sons if I leave in my patrol car one evening and never make it home?” wrote Brookhaven police officer James White, who died in the line of duty along with Cpl. Zach Moak Sept. 29.

White was remembered Friday at the Lincoln County Veterans Day Celebration attended by hundreds of veterans and their families. Nearly 400 people packed the Lincoln Civic Center for grilled burgers and music by the Heritage Family Church children’s choir.

White had served as a member of the Army National Guard in Operation Enduring Freedom and earned a Purple Heart in 2005 when his vehicle was struck by an IED.

Officer White wrote about the explosion in Iraq in 2005 and how he thought about his life while medics stitched up his wounds.

“I wondered how the rest of my life would unfold. It’s easy to live like you’re bulletproof until you’re shown that you’re not,” he wrote.

His essay was written as he recalled a poem — “The Dash” by Linda Ellis — that was given to him in 2002 just before his graduation from Enterprise High School.

“I never know what to expect call to call or on traffic stops,” Lisa White read, struggling to speak at times. “Any one of them could be my last. Maybe I will be remembered as one who was selfless, someone who put others above myself. I don’t know, but I think about this poem now every time I start that patrol car and leave my driveway.”

She followed up her brother’s words by reading the poem about the importance of the dash between the two dates on a headstone. Sen. Sally Doty called for a moment of silence following the standing ovation White received as she left the podium. Rep. Becky Currie presented White with two American flags that had been flown over the state capitol.

Besides honoring officer White, the evening served to pay tribute to those deployed, especially the troops of the 155th Armored Brigade Combat Team of the Mississippi National Guard who are in the Middle East in support of Operation Spartan Shield.

Many in the crowd wore red in honor of those deployed and Greg Marlow of the Capt. Danny D. Entrican VFW Post 2618 urged others to follow suit every Friday.

“Our service members are on call 24 hours a day, seven days a week, 52 weeks a year,” he said. “They willingly ensure our safety and freedom. So let’s wear red and make a point to remember everyone deployed.”

They aimed for an 8, and they got it. The Mississippi State Rating Bureau has declared the Zetus Volunteer Fire... read more