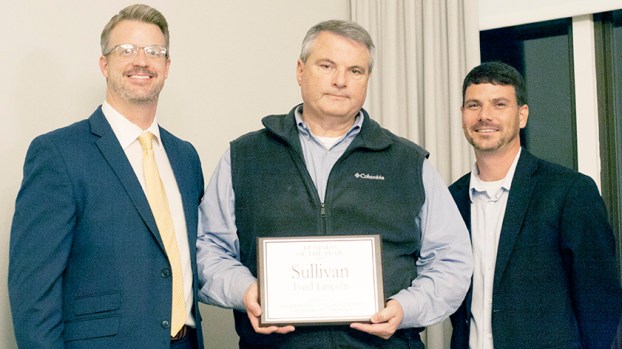 Sullivan Ford is Chamber’s Business of the Year

It was a costly award, but it wasn’t the plaque, or the handshake or the photo that was on his mind while he was writing out the checks.

While Lavelle Sullivan’s dealership, Sullivan Ford, was spending $3.5 million with local vendors across Brookhaven last year, he wasn’t even thinking about the Brookhaven-Lincoln County Chamber of Commerce’s Business of the Year award for 2018. He just thought it was good business, neighborly, even.

“We could probably buy some things cheaper, but our local businesses will reciprocate,” Sullivan said. “We buy oil, tires, repair, wrecker service, auto parts, even paper towels — all kinds of things from other businesses around Brookhaven.”

But the Chamber noticed, and its membership gave him the vote that sent him to the front of the room at the annual banquet Thursday night to receive that organization’s highest annual award, chosen from among a dozen finalists.

“In an environment where online shopping dominates the way we shop, these local businesses support their communities,” he said. “It’s tempting to buy everything from Amazon or elsewhere online, but remember — Amazon hasn’t bought the first fish plate for a local fundraiser, hasn’t employed the first worker from Brookhaven, hasn’t paid a dime in property taxes. Next time you think about buying something, think about what these small businesses do for our community.”

Sullivan Ford wasn’t the only winner at the banquet.

The IDF named Rex Lumber the Industry of the Year.

“It’s just an honor for Rex Lumber to be recognized in this way,” said Rex Lumber manager Doug Boykin. “The McRae family loves Brookhaven and wants to continue to invest in our business. Our employees here are some of the best we have at any of our plants because of their work ethic, their love for the community and their love for their families.”

The Brookhaven location of Rex Lumber is the fourth mill owned by the McRae family, which operated two sawmills and a pole mill in Florida and is constructing a new sawmill in Troy, Alabama, scheduled to start production next summer.

The local sawmill was born out of the ashes of Columbus Lumber Co., which closed down in September 2009 and was purchased by Rex Lumber in November that year. Two years of upgrades and construction brought the new mill online in May 2011, and since then the plant has grown to employ 165 workers who produce around 250 million board-feet of lumber annually. The company purchases around 600,000 tons of timber from within a 50-mile radius of Brookhaven each year.

The Lincoln County Farm Bureau Federation was named the Chamber’s Agribusiness of the Year in recognition of its support and advocacy for local farmers and agricultural programs, including financial support of groups like 4-H, Future Farmers of America, Lincoln County Forestry Association, Lincoln County Cattlemen’s Association, the Dairy Association and its own Young Farmers and Ranchers. It also purchases market animals at the annual Sale of Champions and funds scholarships for students in agriculture pursuits.

“I think this award is good for our federation. It just shows our money is well-used,” said Robert Earl  McGehee, president of the local board. “We guard our money and use it wisely.”

The Chamber also named several Educators of the Year, including Stefanie Orr for Brookhaven Academy’s elementary school, Kelly Allen for BA’s high school, Jessie Case for the Brookhaven School District, Tobie Lambert for the Mississippi School of the Arts, and Kim Nelson for the Lincoln County School District.

Rain this weekend will be chased off by the cold as the first freeze of fall hits Lincoln County Tuesday.... read more