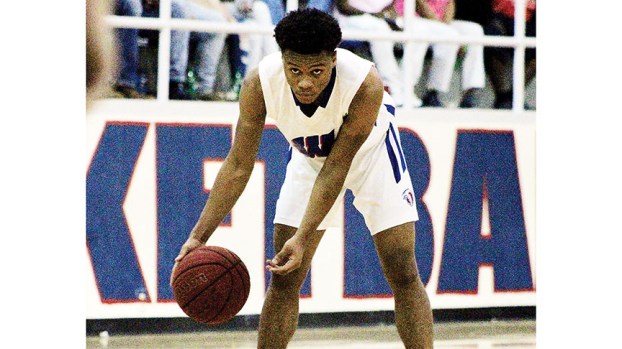 Photo by Cliff Furr Wesson senior guard Shemar Dickerson scored 14 points for the Cobras in their 57-56 win over Lawrence County on Thursday night. The 3-0 Cobras play tonight at Bogue Chitto.

Here’s a look at how area basketball teams performed recently.

The Brookhaven High Panthers traveled to 6A Brandon on Thursday night and came away with a split in the varsity twin bill.

On the boys’ side, the Panthers (1-1) took their first loss of the season when the 3-0 Brandon Bulldogs gained a convincing 82-44 win. The Panther roster will get a boost this week with the return of John Hilbert, Kadarius Wells, Isaiah Wall and Axavian Jones from the football field.

BHS is back in action Thursday, Nov. 15 when they travel to Loyd Star.

The Loyd Star Hornets (3-0) are also still unbeaten after a 66-60 road victory over Pisgah on Thursday. Loyd Star has stacked up some close wins this season, with a three-point victory over Franklin County and a two-point win over North Pike already under their belts. Reese DeHart led the Hornets with 15 points. Zabien Price and Dane Smith scored 11 points apiece. Price grabbed nine rebounds and Smith snagged eight boards.

Pisgah took a close win in the girls’ game by outlasting Loyd Star (0-3) 60-54. The roster for new Lady Hornet leader Christi Terrell is a young one, with just two seniors on the team.

Loyd Star travels to West Marion tonight for a pair of games in Foxworth.

The defending 4A state champion Lawrence County Lady Cougars (1-0) opened their season with a 49-24 win in Wesson (0-3) on Thursday night.

“Our team motto this year is to stay hungry,” said Lawrence County coach Vicki Rutland. “We played together tonight and I’m proud to pick up the win.”

In the boys’ game, the Cobras (3-0) built a large lead and then saw Lawrence County (0-1) come storming back. The Cobras began a comeback of their own after trailing 45-38 to start the fourth quarter. In the end Wesson made the plays necessary to take a 57-56 win, as they remain unbeaten. J.D. Allen led the Cobras with 18 points.

“We’re fortunate to come out on top,” said Wesson head coach Rusty Newman. “I’m glad we were able to make plays when it mattered to get the win.”

The Bogue Chitto Lady Bobcats (2-1) picked up the first win for new coach Robby Walters last week with a 41-22 trouncing of Richland on the road. The B.C. boys (1-2) were outgunned 85-46 by the Rangers.

Friday night the Bobcats were back at home against Salem. The Lady Bobcats picked up their second straight win with a 52-14 stomping of the Lady Wildcats. In the boys’ game BC coach Marvin McGee got his first win as a Bobcat with a 50-44 win over Salem.

Enterprise visited Sacred Heart School in Hattiesburg Friday night. The Lady Crusaders of Sacred Heart defeated the Enterprise Lady Yellow Jackets (0-3) 40-36 in a game that the Lady Jackets led for most of the night.

In the boys’ game, the Jackets (2-1) bounced back from a 48-39 road loss to Pisgah on Tuesday with a 57-47 win over the Crusaders on Friday. Sophomore guard Hib Johnson led the Jackets with 22 points in their win over Sacred Heart.

Enterprise is on the road again tonight as they travel to Salem.

Brookhaven Academy hosted Amite School Center on Saturday in the first home game for the Cougars.

On the boys’ side coach Josh Watts had his football players dressed for the first time as the Cougars won 59-9 over ASC. Britton Nelson scored 14 points and made six steals for BA, and Cade Brown added 12 points.

Wolves top 100 in win over RACS

It was all Co-Lin Thursday night, as the Wolves ran away with a 111-66 win over the Royal Ambassadors Christian... read more