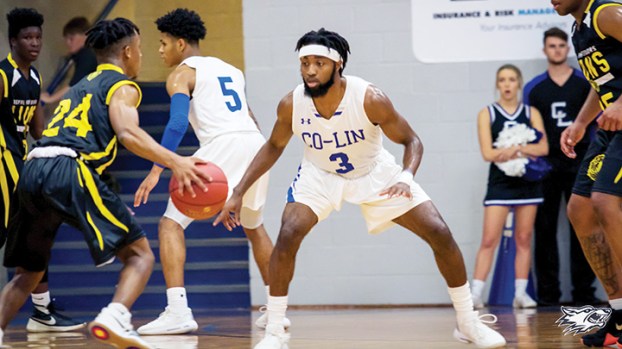 Photo by Co-Lin Sports Information Damarius Brooks, a sophomore from Brookhaven, locks down a Royal Ambassador guard. Brooks finished with 16 points and a team-high seven rebounds.

Wolves top 100 in win over RACS

It was all Co-Lin Thursday night, as the Wolves ran away with a 111-66 win over the Royal Ambassadors Christian School Lions.

Co-Lin seemed to do no wrong in the opening 10 minutes of play, as the Wolves dominated both ends of the court. Co-Lin held the Lions to just four points through those 10 minutes while pouring in 33 points on the offense end. That 29-point lead dwindled to 22 points, 51-29, late in the first half, but the Wolves headed to the locker room up 59-33.

The second half was much of the same for the Wolves. Co-Lin continued to knock down jumpers and dish several alley-oops. The Wolves lead stretched to 31, 71-37 early in the second half, and was up into the forties late in the contest.

Miles Daniels led the Wolves with 23 points after shooting 9-of-15 from the floor and 5-of-10 from three-point range. The performance was Daniels’ second 20-point game of the year.

The Wolves are back in action today as Co-Lin hosts the William Carey Crusaders junior varsity team. Tipoff is set for 7 p.m.