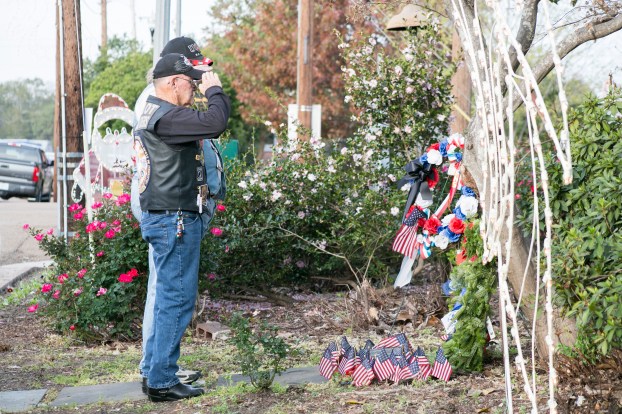 Wreaths Across America to make stop in Brookhaven

The live Christmas wreaths come loaded on Walmart trucks — thousands of them — each representing a fallen member of the armed services.

The wreaths of American balsam, each hand-tied with a red velvet bow, roll through Brookhaven on their way to Houston for wreath-laying ceremonies to be held nationally Dec. 15, but first they make a stop here.

Area veterans, their families and anyone with a patriotic spirit are encouraged to attend a wreath-passing ceremony at 10 a.m. Dec. 13 at Easthaven Baptist Church as part of the national Wreaths Across America project.

Coordinator Terrance Turner, a Walmart Distribution Center transportation manager who served in the armed forces for six years, puts the ceremony together each year as a tribute to the veterans who are no longer with us.

“It encourages civilians to reflect on the sacrifices put forth by America’s fallen warriors,” he said.

The public is always encouraged to attend, and the Army veteran hopes the event will draw a larger crowd in coming years. The program begins promptly at 10 a.m. so Turner asks that everyone is seated by 9:40 a.m. Lunch will be provided after the ceremony.

Wreaths Across America began in 1992, and has developed into the country’s largest military parade. It is designed to honor the memories of slain service men and women and educate the next generation about military sacrifice.

Walmart trucks loaded with live wreaths depart from the Worcester Wreath Co. in Harrington, Maine, every December and crisscross the nation, delivering yuletide cargo along the way. Preparations for the Brookhaven ceremony start in November, and Turner’s team works diligently to pull together the program’s final touches.

Brookhaven has participated in the ceremony for the past 11 years.

From Brookhaven, the trucks split up and some go to Natchez and to Amite, Louisiana, to be distributed in ceremonies at cemeteries there.

The caravan will be escorted by the Patriot Guard and the Mississippi Highway Patrol to the state line. Some of the trucks will head to Houston.

Some wreaths are purposely left behind to be placed on the graves of area veterans. Wreath-laying ceremonies will take place Dec. 15 in Hazlehurst and Wesson.

Turner is always emotional when he’s at these services, but the most emotional part for him is when a veteran’s name is read aloud because it’s a reminder that they won’t be forgotten.

“It’s not just about placing wreaths on graves,” he said at last year’s event. “It’s about teaching and honoring.”

It’s not too late to honor an American hero by sponsoring a wreath for $15 each. To donate, visit www.wreathsacrossamerica.org.

Librarian out over alleged racist posts

A Co-Lin employee who allegedly made racist remarks on social media last month is no longer with the college. Copiah-Lincoln... read more