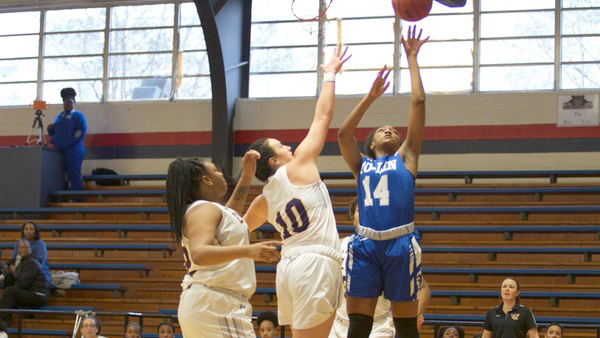 2nd half saves Lady Wolves in win over LSU-Eunice

The Copiah-Lincoln Community College Lady Wolves poured in 51 points in the second half to solidify an 86-61 win over the LSU-Eunice Lady Bengals in Co-Lin’s second and final matchup of the Southwest Mississippi Community College Coca-Cola Classic tournament. The win moves Co-Lin to 4-0 on the year.

The Lady Wolves are back on the road Friday as Co-Lin travels to New Orleans to take on Delgado. The game will be played at the Alerio Center in New Orleans and tip at 5:30 p.m.

The first half of the contest against the Lady Bengals was very physical and very low scoring. The action was back-and-forth as the lead changed hands nine times in the first two quarters. One of Co-Lin’s main weapons, the three-pointer, was not hitting in either of the opening quarters, as the Lady Wolves were 0-of-11 from beyond the arc. A 7-2 run in the final four minutes and a pair of free throws from T’Kyra Hicks in the final seconds of the second quarter gave Co-Lin a 35-34 lead going into the half.

Co-Lin emerged from the locker room a more cohesive team. The three-ball continued to be a problem for the Lady Wolves, but Sha’Quandra Carter, Dashell Davis, Camryn Davis, and Alexandria Patton began showing presence under the goal. Darien Tubby, Hicks, and TaMara Riley also started finding more space on the perimeter for some mid-range looks.

The Lady Wolves fired off an 11-2 run to start the third quarter, and coach Gwyn Young kept the pressure on for the remainder of the game. Co-Lin’s lead grew to 11, 54-43, late in the third, and the Lady Wolves never looked back.

Tubby led Co-Lin in the scoring column with 19 points after going 8-of-9 from the floor and 1-of-1 from three-point range. Hicks finished with 16 points, while Carter posted 14 points and nine rebounds. Carter was 5-of-9 from the floor. Dashell Davis rounded out the Lady Wolves top scorers with 11 points but also posted Co-Lin’s first double-double of the year as she led the team with 15 rebounds. Camryn Davis led Co-Lin in assists with five.

The Copiah-Lincoln Community College Wolves had a dominating performance against the William Carey JV Crusaders on Tuesday night. The Wolves’... read more