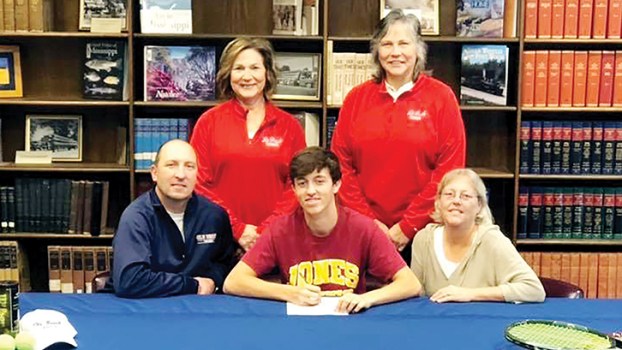 Brookhaven High senior tennis player Daniel Panzica signed a letter of intent with Jones College in a ceremony on Nov. 5 in the school library. Pictured are, front row: Panzica with his parents Richard and Becky; back row, from left: head tennis coach Nancy  Fisher and assistant coach Becky Green.

Panzica was part of the 5A state championship doubles team as a junior with Will Moak. Fisher says Jones is getting a player that can help them immediately.

“Daniel is an all-court player with a large repertoire of shots,” said Fisher. “He is a leader, hard worker, enthusiastic, and an extremely skilled player. He will definitely be a huge asset to their team.”

The Panzica name is one that is synonymous with tennis in Brookhaven. Panzica’s uncle Greg and father Richard have long been part of local USTA leagues. Richard was a standout at Co-Lin and has been a strong player in his own right.  For a BHS program that is one of the strongest 5A teams in the state year in and year out, Fisher says Panzica is one who has left his mark as a Panther.

“He has played varsity since seventh grade and is one of the finest players I’ve ever coached,” said Fisher.

2nd half saves Lady Wolves in win over LSU-Eunice

The Copiah-Lincoln Community College Lady Wolves poured in 51 points in the second half to solidify an 86-61 win over... read more