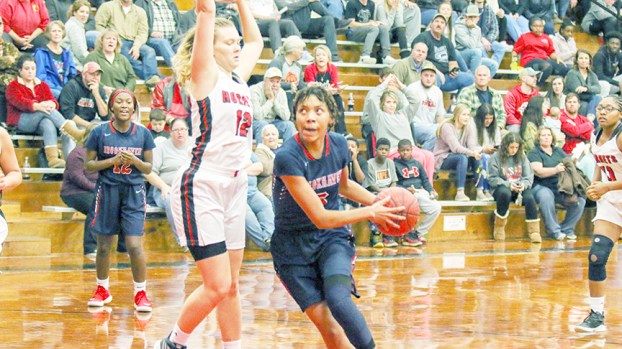 Regardless of where your allegiance lies or what area team you follow, if you’re a fan of good high school basketball, then you need to make it a point to go see the Brookhaven High School Lady Panthers in person this season.

The Lady Panther (3-0) full-court press was in full effect on Thursday as they overwhelmed Loyd Star 64-27 (1-4) in the Hornet Nest.

Senior forward Tamia Stallings did the work inside for BHS in the first half, as she scored 14 points before halftime to push her team to a 28-15 lead at the break. In the second half, it was junior forward Silentianna Collins who heated up, as she dropped 16 second-half points for coach Preston Wilson. Stallings and Collins would finish with 18 points apiece.

Collins got her team started in the third quarter, as she nailed a three-pointer on the first possession. She then stole the ball, hit a short jumper and then grabbed another steal and layup. Collins had scored seven in a row and Brookhaven was well on its way to victory.

Wilson has consistently built the program up since moving over from the boys’ side in 2015. His first team finished 3-24. The next season saw an improvement of 14-14 before the team last season finished 24-7 and was eliminated in the 5A quarterfinals by Lafayette.

This season, with an identity for the program firmly in place and expectations high, Wilson wants to see his team mature in more nuanced ways.

“The girls know how we want to play night in and night out,” said Wilson. “This season, I want us to make our fouls count when we make them. Last season we’d foul people because we were out of position or tired. We need to be smarter while still being physical and adjusting to how the game is going to be called.”

A good indicator of how far the program has come is the fact Stallings signed a Division I scholarship with Jacksonville University earlier in the day. The ceremony will surely be repeated next year at this time when Collins decides where she wants to play next. The last Lady Panthers to sign at the highest level were Nikki Byrd (Ole Miss) and Swayze Black (LSU) in 2007.

The physicality and size of the Brookhaven defenders was more than the young Lady Hornet team could take. When first year Loyd Star coach Christi Terrell sees her opponent playing full-court and fast, she sees the type of pace she wants her team to play one day.

“The girls have always played a half-court game in the past, so it’s going to be a process for us to speed things up,” said Terrell. “The most important thing is the team, Lady Hornets basketball. We want to be a group that hustles and runs the court hard, so we’ve been working on conditioning a lot.”

Loyd Star only has two seniors in forward Christie Patterson and center Sarah Britt. Terrell sees her team understanding what she wants them to accomplish and hopes to see their execution improve as the season progresses.

“Christie and Sarah are working hard, and it’s difficult for upperclassmen when a new coach comes in and changes the way the team has always played, but they’re all coachable,” said Terrell. “Our point guard Aubrey Britt is a freshman and she was facing a very fast and physical defense tonight, but she never backed down.”

Terrell has built a program before. Her Bogue Chitto teams were always active defensively and scored lots of points off transition and turnovers. She’s trying to now build an identity within her program, which is exactly what Wilson has done over the last four years.

The Brookhaven press starts as soon as the ball goes through the net on a made basket. The guards are quick in the way they find whoever they are defending, and they work doggedly to make sure the offense doesn’t get a free inbounds.

When and where the jump to double the ball comes from depends on what Wilson has called, but the forwards are usually playing up and in a centerfield position. It’s a defense that lots of teams use to speed their opponents up and force turnovers. However, most teams don’t do it as well because they don’t have the length and athleticism of Stalling, Collins and McNairy patrolling the court and flying around to deflect balls.

The Lady Panthers have future matchups with McComb, Lawrence County, Terry, North Pike, Meridian and Warren Central, among others, before they ever begin region play. For now, Wilson is pleased with how his group has started the season.

“Beating Brandon last week was a nice win, but we’ve got some good teams coming up and I want the girls to realize that they’re capable of playing better,” said Wilson. “When you get into division play and the post season you can’t decide to turn it on after a bad start, you’ve got to be on from the jump.”

Aubrey Britt led the Lady Hornets in scoring with eight points and was followed by Sarah Britt with six.

“Playing bigger schools are only going to make us better,” said Terrell. “There aren’t many teams in this area that apply more pressure than Brookhaven. We’ll learn and grow from this.”

The Loyd Star Hornets (4-1) are going to win a lot of basketball games this season. On Thursday night, though,... read more