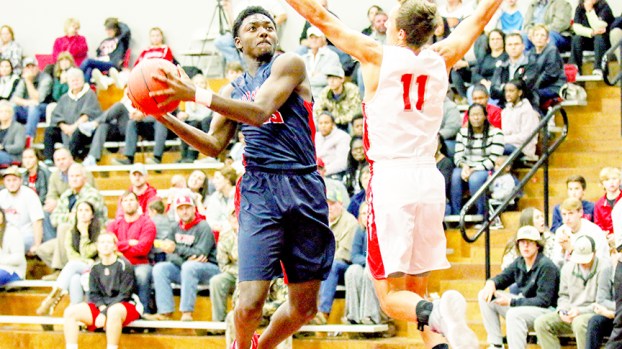 The Loyd Star Hornets (4-1) are going to win a lot of basketball games this season.

On Thursday night, though, they suffered their first loss of the season, as the Brookhaven High Panthers (2-1) used defensive pressure to take a 68-53 victory over the homestanding Hornets.

Loyd Star led 19-14 after the first quarter, as their half-court offense looked crisp and precise against the 5A Panthers.

Nine of those first-quarter points came from three-pointers off the fingertips of Dane Smith. Smith is a senior guard that is one of the best players in the area. In the opening eight minutes, he showed off his deep range as the Hornets worked the ball until they got the look that coach Seth Britt wanted.

Panthers coach Marcus Flippin started his team off in man-to-man defense, but realized his players would need to dial up the pressure to make the Hornet ball-handlers uncomfortable.

Only 40 seconds remained in the first half when Brookhaven took its first lead, as senior forward Lafollette Bogan sliced in for a layup after making a steal. The three-quarter court pressure by the Panthers had caused the steal, and Bogan was fouled on the layup. His subsequent free throw would put Brookhaven up 26-24 and the Panthers would never trail again.

“I was a little hesitant at first for us to extend our defense out,” said Flippin. “Our football guys are fresh off the field and are still trying to build their legs back up. Loyd Star forced us to do it with how well they were running their offense in the first quarter.”

It was one of those fresh-from-the-field football players who kept Brookhaven close early with his perimeter shooting. Senior guard Isaiah Wall hit two first-half three-pointers that came during stretches where the Panthers were struggling to score in the half court. Wall finished with 10 points, and fellow former footballer John Hilbert added nine points. Sophomore point guard La’Darius Thrasher scored nine points as well.

The physicality of the Panther press was frustrating for the Hornets to solve at times, but Britt was proud of how his team responded to the pressure in the second half.

“I want to play teams like Brookhaven that are going to challenge our guys,” said Britt. “There were times in the second half where we faced the pressure and found the open man and handled it. We had 30 turnovers tonight and the goal is that when we return this game in a few weeks, my guys will be more confident in how they handle it.”

Loyd Star faces a Wesson team that plays a fast style of basketball on Friday. The 2A Hornets already own a win over 5A North Pike and have another matchup with the Jaguars later this season.

The Hornet offense will flow through Smith this season, but he’s surrounded by capable ball-handlers in senior point guard Jett Calcote and junior wing Reese DeHart. Senior forward Zabien Price is another piece that Britt can use in a variety of ways. The 6-foot-2, 255 pound Price is strong inside and on the boards, but also has the touch to step outside and shoot from distance. Senior center Gabe Netterville gives Loyd Star one of the taller inside presences in the area, as he stands at 6-foot-4.

Smith scored a team-high 27 points Thursday and was followed by Price, who had seven.

Seth Britt is in his first year replacing the legendary Gene “Moochie” Britt. When Moochie Britt retired after last season, Seth knew that he wanted the job. When Seth was in seventh grade, Moochie came to Loyd Star to lead the Hornet program. It’s sort of ironic that Seth would be coaching basketball at his alma mater, as he was always known for being a standout baseball player.

“I was the baseball player growing up and my brother, Jared, was the basketball player,” said Britt. “Now, I’m the head basketball coach and he’s the head baseball coach. I taught these kids and coached many of them as an assistant in football and baseball, so when the job came open I knew I wanted it. I’m thankful that our principal Mrs. (Robin) Case gave me this opportunity.”

Britt mentions playing a team like BHS will prepare his troops for the playoffs. The playoffs are also a destination that Flippin has for his team in his second year leading the Panthers. Last season, BHS finished 12-17. This season, Flippin can already see after three games that his team is much more committed to working on the defensive end.

“I think we’ve got really good depth this year,” said Flippin. “There was a little rust tonight for our guys who just came from football, but I see a willingness from our guys to work on defense and I’m very pleased with that.”

If you ever saw Flippin’s successful girls’ teams at South Pike, you know the formula is to play fast on defense and spread the court on offense. Flippin prefers to space out shooters on the perimeter and leave the lane open for cutters. That plan took the South Pike Lady Eagles to the 3A state championship in 2007.

In Bogan, the Panthers have a long-limbed senior forward whose game can be defined as “smooth.” He’ll bring the ball up the court and serve as the point-forward on the offensive end. On defense, he’ll be at the head of whatever press the Panthers are using to harass their opponents. He struggled with his shot at times on Thursday, but still finished with a game-high 31 points.

Bogan has already been offered a scholarship by Copiah-Lincoln Community College.

The Panthers will use a variety of players on most nights, as Wall, Hilbert, K.D. Wells, Jermario Hersey and Axavian Jones are just a few of the athletic Panthers that move well on the press. Brookhaven doesn’t have much height, though, and rebounding as a team will be important.

“There were times tonight that we didn’t get buckets inside when I thought we should, and we’ve also got to do a better job of crashing the boards as a team,” said Flippin. “Teams we’ll play later, like Wingfield and Forest Hill, are going to be big and physical when it comes to rebounding the ball.”

Smith hit a three-pointer with 2:20 remaining in the game that cut the Panther lead to 60-53. A Hilbert layup on the next possession would be the BHS answer, as Loyd Star would get no closer.

“I’ve got to do a better job of coaching at the end of the game,” said Britt. “We should have fouled and slowed the game down late in the fourth. Brookhaven has a good team and I think we’re only going to grow from this.”

Brookhaven next plays in the Lawrence County tournament on Monday and Tuesday. Loyd Star picks back up after the holiday break with a game at Salem on Nov. 27.

When Tamia Stallings was halfway through her high school basketball career, she realized playing the sport on the collegiate level... read more