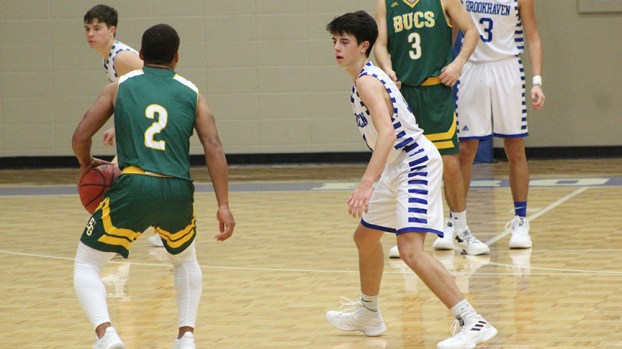 You could be excused if you thought coach Josh Watts was calling for a play named “GO” on Monday night.

After every defensive rebound in the first quarter, Watts would bark for his Brookhaven Academy Cougars to “go,” “run” and “shoot it.” That’s exactly what the Cougars (4-0) did, and did well, as they cruised to a 57-18 win over the Bowling Green Buccaneers in the BA Thanksgiving Tournament.

Watts and his squad led 28-4 after one quarter, as the Bucs from Franklinton, Louisiana looked shell shocked at what they were seeing. A Dawson Flowers layup got the Cougars on the board and would be followed by a Tanner Thurman three-pointer, and then a Sean Beard three-pointer. Flowers would get another layup, Thurman would stroke another three and Flowers would again drive in for a score. Bowling Green coach Jaron Edwards would call a timeout and the Cougars had a 15-4 lead that mostly came on transition buckets.

This team is different from the one that Watts won the MAIS AA state championship with last season. Their pace of play is faster, and they have a variety of ways they can hurt you. Junior point guard Britton Nelson is in his first season as a varsity starter and is in charge of pushing the pace. On the wings, Nelson has the option of Thurman or Beard to pitch ahead to. Both shooters, Thurman and Beard have the confidence and permission of their coach to hoist it whenever they are open.

Thurman is a senior who has worked extremely hard to improve his game and earn his starting position, Watts said. Beard is a senior who joined the team this summer after moving from Baton Rouge. Beard previously played at LHSAA 4A Woodlawn in Baton Rouge.

The forwards for BA are the senior duo of Flowers and Cade Brown. The pair, who have made so many plays together on the football field, will be hard for most MAIS schools to contain inside. Flowers has touch around the basket and is near 6-foot-4. Brown isn’t much smaller and has an explosiveness the Cougars can use in the open floor. When Nelson comes out, Flowers moves to the point guard spot. Brown can also play away from the basket.

Off the bench, the Cougars will count on the Fortenberry brothers, Tyler and Trey. Trey is a sophomore and is 6-foot-3. Freshman Trey is also long, lanky and still growing. Tyler is an active rebounder and Trey has the ability to score off the bounce. Trey was second on the team with 10 points Monday night. Junior guard Piker Ratliff will also be one of the first subs off the bench for Watts.

The game did eventually slow down, as the Bucs outscored BA 8-6 in the second period.

“We could do a better job of running our half-court sets and getting scores when things slowed down,” said Watts. “The hope is to be able to build on the fast start and not take your foot off the gas, but we’re still building our legs up to be able to do that.”

The Cougar defense stymied the Bowling Green offense, as the BA players talked through every screen and helped on every drive. Watts has a familiarity with this group that has them playing well early in the season.
“Almost every one of these guys has been playing for me since they were in junior high,” said Watts. “They know what I expect and how I want them to play defensively.”

The Cougars come back from the Thanksgiving break on Tuesday, Nov. 27, when they travel to Copiah Academy. BA will face the Colonels without Brown or Flowers on that night, as they’ll be in Jackson preparing for the MAIS All-Star football game on Nov. 30.