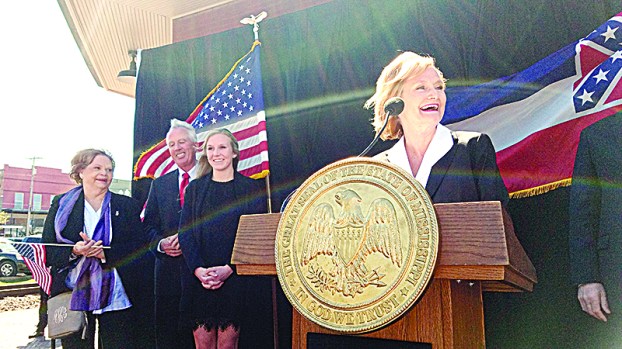 Walmart is asking U.S. Sen. Cindy Hyde-Smith to return a recent campaign contribution because of comments by the Mississippi Republican that dredged up strong emotions about the state’s history of racial violence.

Hyde-Smith’s campaign did not immediately respond to questions from The Associated Press about whether it would refund the $2,000 contribution from the nation’s largest retailer.

The rebuke from Walmart came hours before Hyde-Smith was set to appear Tuesday night for her only debate against Democrat Mike Espy, a former congressman and former U.S. agriculture secretary who is seeking to become the state’s first African-American senator since Reconstruction.

Walmart spokeswoman LeMia Jenkins said Tuesday that the company donated to Hyde-Smith Nov. 8. That was two days after Hyde-Smith and Espy advanced from a field of four candidates to go to a Nov. 27 special election runoff, but three days before release of the video showing Hyde-Smith praising a supporter at a campaign event by saying: “If he invited me to a public hanging, I’d be on the front row.”

“Sen. Hyde-Smith’s recent comments clearly do not reflect the values of our company and associates,” Jenkins said in a statement. “As a result, we are withdrawing our support and requesting a refund of all campaign donations.”

President Donald Trump reiterated his support for Hyde-Smith on Monday ahead of a campaign visit to Mississippi next week. Meanwhile, former Vice President Joe Biden endorsed Espy, a former congressman and U.S. agriculture secretary who is seeking to become Mississippi’s first African-American senator since Reconstruction.

Hyde-Smith was appointed to the Senate to temporarily succeed longtime Sen. Thad Cochran, who retired in April amid health concerns. She is the first woman to represent Mississippi in Congress.

Hyde-Smith and Espy each received about 41 percent of the vote when four candidates were on the ballot Nov. 6. If she wins the Nov. 27 runoff, Hyde-Smith would give Republicans a 53-47 majority in the U.S. Senate.

Mississippi hasn’t elected a Democrat to the U.S. Senate since 1982, and Republicans hold all but one statewide office. Still, Espy is seeking a longshot victory nearly a year after another Democrat, Doug Jones, won a Senate race against a troubled Republican candidate in neighboring Alabama.

The contest has intensified since the publisher of a liberal-leaning news site posted a video clip Nov. 11 on social media, showing Hyde-Smith praising a cattle rancher at a Nov. 2 campaign event with the public hanging comment.

The same Louisiana-based publisher, Lamar White Jr. of The Bayou Brief, posted another video clip Nov. 15, showing Hyde-Smith at a Nov. 3 event in Starkville talking about “liberal folks” and making it “just a little more difficult” for them to vote.

In a statement, Hyde-Smith called the hanging expression an “exaggerated expression of regard” and said it is “ridiculous” to read any negative connotation into it. She repeatedly refused to answer questions about it during a news conference in Jackson, but the issue is sure to come up at the debate.

Her campaign has said she was joking about hurdles to voting.

In a state with a history of lynchings and violent suppression of black voting rights, critics denounced her remarks as ignorant at best and racist at worst.

“That statement has historical context to it, and it shows that she doesn’t really know black people,” said Crudup, who is supporting Espy. “This is something that has everybody in an uproar because, in 2018, you want to think that we’re beyond this. And probably for most of my folks, too, what makes it worse is not to apologize about it.”

Merle Flowers, a white former colleague of Hyde-Smith’s in the Mississippi Senate, said she is being unfairly criticized for the “public hanging” comment.

“She’s a fine Christian woman and she meant no ill will in what she said. I believe the national media has blown it out of proportion,” said Flowers, a Republican who is treasurer of Mississippi Victory Fund, a super PAC that has spent nearly $790,000 to help Hyde-Smith in the special election.

Hyde-Smith served 12 years as a Democratic state lawmaker before switching to the Republican Party in late 2010 and winning statewide races as agriculture commissioner in 2011 and 2015.