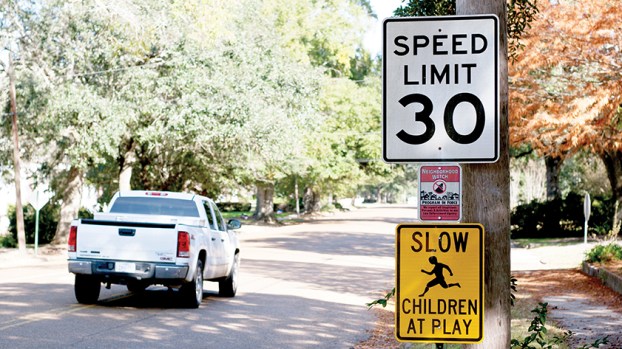 Photo by Adam Northam Posted speed limits within the Brookhaven city limits vary from 15 to 30 miles per hour.

City may reset all speed limits to 25

Brookhaven aldermen may have a solution for all the inconsistencies in speed limits around the city — wipe them all out and start over.

The Brookhaven Board of Aldermen on Tuesday took its first look at a simple draft resolution that would set speed limits on all city streets at 25 mph, removing numerous variances around the city that have some streets posted at 35 mph, some at 25 mph and some shorter, little-used stretches not posted at all. The two-page resolution was presented by Dungan Engineering Principal Ryan Holmes as a first step toward normalizing traffic conditions in the city after aldermen asked him to study ideas for controlling speeders around town.

“When you get these requests for speed limits or traffic devices, do we single them out, or do we try to develop a manner to deal with them going forward?” he said. “It’s interesting to see our variation in speed limits across town, and we’ve got quite a few streets that are not posted. That probably happened over a number of years.”

Holmes suggested setting speeds on the larger streets based on a traffic engineering rule that states 85 percent of drivers on a street will drive at a safe speed. The speed would be determined by taking speed radar readings of motorists and averaging their speeds together.

The proposal would not affect state-maintained streets, like Hwy. 51 and Monticello Street, where aldermen lack the authority to adjust speed limits.

Holmes’ proposal comes a month after South Jackson Street resident Sarah Reynolds requested the board lower the 30 mph speed limit on her street to 25 mph, citing safety concerns for children living in the area.

Ward 2 Alderman Shannon Moore raised concerns the board would be hit with numerous requests from other parts of the city if it singled out South Jackson. Moore has also been adamant about adding speed bumps in his ward, though the board opposes speed bumps and city attorney Joe Fernald advised aldermen the city would be responsible for any damages incurred by motorists who hit speeds bumps too hard.

Holmes advised last month state law prohibits adjusting speed limits without traffic studies. Aldermen took the draft resolution under advisement Tuesday, and it is unclear when or how it will be implemented.

“I think this would be the most logical way to do it — you could provide proof of what you’re doing,” he said. “A uniform speed limit would be good for the city, and officers would know how people are supposed to be driving. We can implement enforcement with that and just start writing tickets. People will be mad, but that’s our job.”

Holmes said around 200 of the city’s 395 streets are unposted.

But speed humps are more expensive and require pavement marking and signage, and must be maintained after installation. Collins said the city spent around $10,000 installing similar traffic control devices in Cloverdale.

Collins advised aldermen to consider doubling fines for speeding in school zones, and Alderwoman-at-Large Karen Sullivan suggested building the doubled fines into the draft resolution. Mayor Joe Cox stopped discussion for the time being, saying the proposal should be considered a “phase one” approach and the board can make adjustments later.

“This is something we’ll have to talk about. I really like this ordinance, and designating the roads,” he said. “We can implement this, and then go from there.”

Technocats are ready for first competition

The students at Bogue Chitto took Liberty for a ride to work out the bugs. Six students — two new... read more