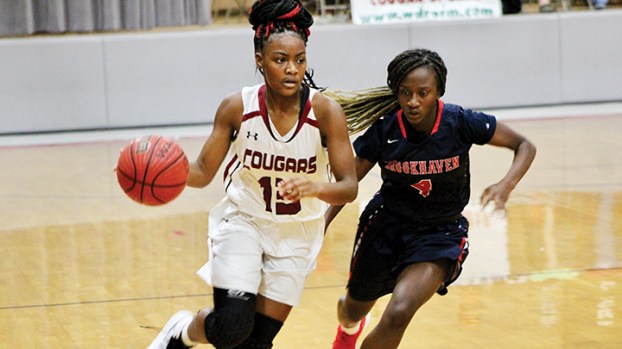 The Brookhaven High Lady Panthers (6-0) finished unbeaten at the Lawrence County Thanksgiving Tournament with a 66-39 win over the host Lady Cougars (2-3) on Tuesday night. On Monday BHS defeated Tylertown 57-35 at Lawrence County.

The Lady Panthers have won by an average of 28 points in their perfect start. It was again the thunder and lightning duo of forwards Tamia Stallings and Silentianna Collins that led Brookhaven in scoring on Tuesday.

The long and lean Collins scored a game high 18 points against LC. Collins dished out six assists on Tuesday night after handing out seven on Monday against Tylertown. She is averaging team-high 17 points per game.

Brookhaven jumped out to an 18-7 lead that the Lady Cougars would never be able to recover from.

As good as Stallings and Collins have been, the Lady Panther press defense begins with the guards on the front end.

At times head coach Preston Wilson felt like his team was getting out of control on Tuesday. Wilson stresses the difference in playing hard and playing sloppy.

“We had to get our guards settled down at times,” said Wilson. “We were reckless with the ball on offense and in the first half we were fouling entirely too much and sending Lawrence County to the free throw line.”

The Lady Cougars scored 18 first half points and 10 of those came on free throws.

Lawrence County is coming off of a 4A state championship season, but with eight seniors lost to graduation, head coach Vicki Rutland and her team are still trying to figure out what works this season.

One big returning piece for LC is senior guard Kyuanna Thomas. Thomas averaged 12.3 points and 6.4 rebounds per game last season. On Tuesday night she spent most of her time on the bench as early foul trouble limited her minutes.

With less than a minute gone by in the third quarter Thomas picked up her fourth foul. That would send the athletic Thomas back to the bench at a time that Brookhaven held a commanding 39-19 lead. Thomas would finish with five points.

If you’ve seen a Rutland coached team in the past, then you know they always improve and sharpen their scheme as the season progresses. Lawrence County has solid size across the board in Thomas, Lewis and Buckner. McCallum — a long, skinny junior — handles the ball well and will give teams a problem with her ability to pass over smaller defenders. The Lady Cougars are better suited for a half-court game but playing an opponent that presses like Brookhaven is exactly what Rutland wanted for Thanksgiving.

“This is our tournament and we could have scheduled anyone we wanted, but we want to play Brookhaven and face their pressure,” said Rutland. “Last season we only lost three games and two of those were to Brookhaven High so we’ve got a lot of familiarity with their program and a lot of respect for what Coach Wilson has done there.”

Of the 11 players dressed for Lawrence County on Tuesday night, five of them were freshman. Rutland says the process of figuring out what works and who works best together for her team are answers she hopes to have before region play begins in 2019.

“We’re still trying to blend in some of the younger players with the more experienced ones,” said Rutland. “We’ve got North Pike next week and then we’ll have to face Brookhaven again soon at their place. The hope is that we’ll have better composure than we had tonight when we play them again.”

In a game that featured turnovers of every variety, the Brookhaven Panthers made plays down the stretch that held off... read more