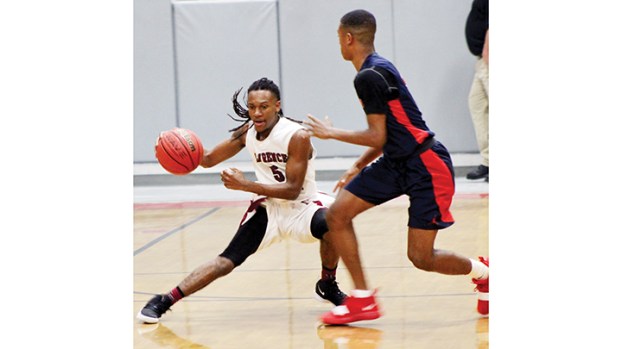 In a game that featured turnovers of every variety, the Brookhaven Panthers made plays down the stretch that held off the Lawrence County Cougars 57-50 on Tuesday night in the Cougar’s Thanksgiving Tournament.

With three minutes remaining in the game and Brookhaven leading 48-46, BHS got two of their two best half court possessions of the night on consecutive trips. The first one saw the Panthers move the ball against the LC zone and senior forward John Hilbert knocking down a wide-open 3-pointer from the wing. On the next possession sophomore guard La’Darius Thrasher drove into the paint and canned a floater that put his team up 53-46.

Brookhaven High coach Marcus Flippin started a lineup that featured Thrasher at the point and junior big-man Kadarius Wells in the post. The other wings were junior Jermario Hersey, senior Axavian Jones, and senior Lafollette Bogan.

Flippin thinks that lineup along with a group that features Hilbert, Isaiah Wall, Caleb Edwards, Piedro Wilson, and sophomore Cedarius Brothern coming off the bench is what is working best right now for his team.

What Flippin really wants for his group is some rest. The Panthers were playing their fourth game in six days and looked to have tired legs at times on Tuesday.

“We didn’t turn the pressure up until late because we were trying to save some energy,” said Flippin. “We had too many turnovers, but I was proud of our offensive possessions at the end of the game when we needed a basket.”

Flippin himself was feeling under the weather as he coached from a seated position most of the night instead pacing the sidelines as he usually does.

The type of turnover that plagued both teams are best described in a term that is most often used in tennis — unforced errors.

On three consecutive trips in the third quarter Brookhaven turned the ball over without taking a shot. Travels when players took off to drive, double dribbles, charges when drives weren’t stopped by a travel — the game featured a cornucopia of sloppy play at times. Brookhaven finished with 23 turnovers.

On Monday in a 68-54 win over Wesson the Panthers got 18 points from Thrasher and 17 from Bogan.

Lawrence County was coming off a win of their own on Monday when they defeated McComb 53-35. Cougar head coach Pat Bridges wants to see his team turn up the intensity sooner than late in the second half when they are facing a deficit.

“We got beat to too many 50/50 balls tonight,” said Bridges. “It felt like they got their hands on every ball and every rebound. There were a lot of things we didn’t do well, but it was a two-point game late and we had our chances.”

BHS led 27-21 at halftime. Just before the third quarter horn Lawrence County senior forward Darrell Newsome scored on a put back that cut the Panther lead to 42-38.

With the Davises, seniors Kam Barnes and Eddie Pierre, the Cougars have plenty of capable ball handlers and some outside shooting options. What the Cougars don’t have is height. Newsome, K.D. Gordon, Zavion Bridges, and Juan Rhodes have to do the dirty work in the paint for Bridges and his team. Gordon — a senior — is the biggest of the group at 6-foot-3.

Last season the Cougars finished 20-11 and went a perfect 10-0 in Region 7-4A in the regular season. The Cougars also won the division tournament before being bounced by South Pike 65-61 in the opening round of the playoffs.

“Some of our better scorers are young guys and they’re still getting adjusted to how physical the game is at this level,” said Bridges. “We’re still a work in progress.”

The Brookhaven Academy basketball teams took a sweep over Parklane Academy on Tuesday night in the final matchups of the... read more