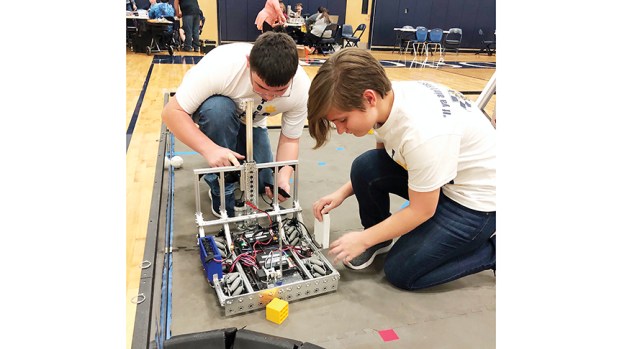 Photo submitted The Technocats of Bogue Chitto High School are getting ready for their first competition of this school year. Pictured are, from left: Bryce Fortenberry and Breana Meche.

Technocats are ready for first competition

The students at Bogue Chitto took Liberty for a ride to work out the bugs.

Six students — two new to the Technocats robotics team and four returning members — spent a recent Saturday morning at the school remotely controlling a robot they built themselves.

Coach Reggie Wise said this was a practice run for the team and nothing was scored. It gives the students a chance to run their robots without the pressure of judges’ watchful eyes.

“It’s a way to work out the bugs that you have,” he said.

Freshmen Bryce Fortenberry and Breana Meche joined four returning members who are advised by two coaches and three adult mentors — former Technocats who have graduated and come back to help.

The team named their robot Liberty, to honor the theme of the national robotics competition — man’s first moonwalk, Wise said.

Each year, high school students are tasked with building a robot that can perform assigned tasks. Liberty’s mission will be different from Phoenix’s mission last year, he said.

At the scrimmage held Saturday, the teams worked on their robots then practiced against each other.

“It gives them a chance to adjust their robot,” he said.

It’s also a good way to earn game experience that will come in handy during their first competition Dec. 1 in Oxford. The Technocats will face 14 teams as they claw their way to the state tournament. The top three teams advance to the FIRST (For Inspiration and Recognition of Science and Technology) Challenge world championship.

The Technocats got a taste of that last year. Though they weren’t in the top three at state, they earned a spot in world as a wild card pick — the only school from Mississippi to receive that honor.

That means the majority of the team has experienced the world competition and are hoping Liberty will help them grab that first place spot for the first time.

“They know what it takes to do it,” Wise said. “We feel like we have as good a chance as any. This is a hard-working bunch. It’s a bunch of good kids.”

To make a donation or to get more information about the Bogue Chitto robotics team, visit www.technocats.us.

Lincoln County schools appear to be getting ready to crack down on families who live in one school’s attendance zone,... read more