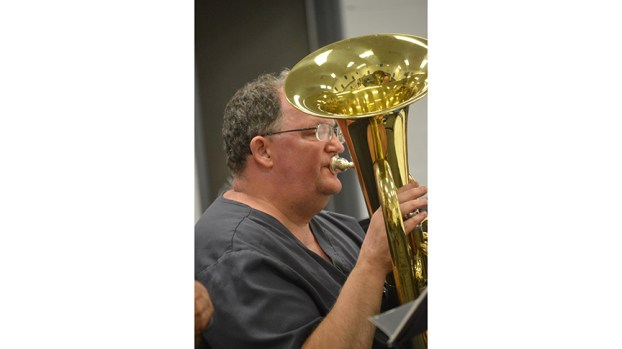 Photo by Donna Campbell Bill Dowdy plays the euphonium, also called a baritone, at practice before a recent concert by the Ole Brook Wind Symphony.

Brass band is warm-up for ‘Star’

TubaChristmas has finally found its way to Brookhaven.

Merry TubaChristmas 2018 can be heard and seen Dec. 1 at 5 p.m. at Lampton Auditorium on the campus of the Mississippi School of the Arts.

The concert is free and open to the public.

Musician Shaw Furlow is excited to bring together area tuba and euphonium players to play pieces that allow them to embrace their instruments.

The cost for each player is $10 which includes a commemorative TubaChristmas button, plus purchase of a $20 music book. Registration is at 2 p.m. at Brookhaven First United Methodist Church Family Center and the rehearsal begins at 3 p.m., both on the day of the event. Online registration is also open at www.tubachristmasms.com.

Furlow said he’s participated in a few TubaChristmas concerts, but this will be the first time he’s organized one. When he was band director at Copiah-Lincoln Community College, the parade schedule was always too busy to allow him time to do it.

Some shows in larger areas attract more than 100 participants, from elementary school students to senior citizens, he said.

“We threw it out there as a wild goose chase,” he said.

He’s hoping to get at least 12 tuba and euphonium players to participate in the concert, which traditionally includes just one one-hour practice immediately before the show. A few have agreed.

“If we do that will be a huge success,” he said.

Not only will the concert allow horn players to show off their musical prowess, it will also give them a chance to be creative decoratively.

Furlow is looking for the most festively-decorated horn. The winner will receive a gift certificate to Brookhaven Music & Sound Company.

TubaChristmas will be followed by “The Star” on the lawn of Mississippi School of the Arts. The movie, sponsored by Brookhaven Tourism Council and the Brookhaven-Lincoln County Chamber of Commerce, begins at 6:30 p.m.

That’s how Santa rolls — St. Nick to be in several parades

Throw me something, Mr. Claus! That’s what you holler when you have a hankering for candy at a Christmas parade... read more