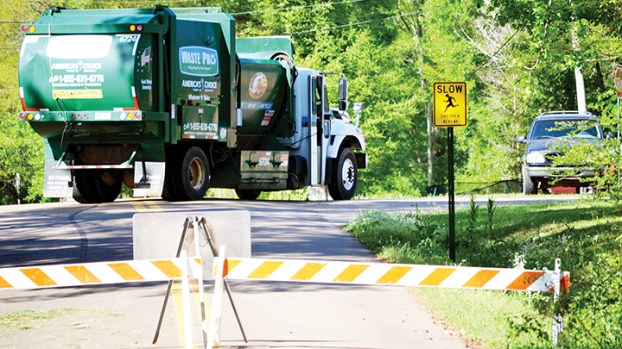 Photo by Donna Campbell A Waste Pro truck makes the rounds on Williams Street in Brookhaven.

Brookhaven will follow Lincoln County’s lead and dock Waste Pro’s final payment, though shorting the bill will likely lead to a fight in court.

The Brookhaven Board of Aldermen on Tuesday voted to deduct $40,445 from its final payment to former trash collection contractor Waste Pro, an amount calculated to cover the costs incurred by city crews who hit the streets to pick up garbage over the summer after Waste Pro’s service began to slide. Aldermen voted to subtract the amount — two-thirds of the approximately $63,000 total for the month of September — after a short executive session for possible litigation.

The closed session was held for the likelihood Waste Pro will sue the city over the adjustment. The company has already threatened to take the Lincoln County Board of Supervisors to court over supervisors’ decision to withhold more than $140,000 out the company’s final $160,000 payment.

Both city and county leaders allege Waste Pro failed to meet the obligations of its contracts and the deductions are fair to cover their costs, though the garbage company said in a letter to the county it doesn’t believe supervisors collected as much garbage as they claim.

“If it goes to court, we’ve got about 6,000 witnesses,” said city attorney Joe Fernald, referring to city residents.

Both local governments began keeping records of their expenses while picking up garbage earlier this summer when Waste Pro’s misses began to mount.

Supervisors established a missed garbage hotline in the county tax office and began tracking the number of calls, and Waste Pro officers appeared in person to promise service would improve. When it didn’t, both city and county crews began responding to residents’ complaints to pick up sitting garbage.

Waste Pro’s lapses began mounting just as the company’s three-year contracts for Brookhaven and Lincoln County were set to expire. Both boards stretched out the selection process and ultimately chose Alabama-based Arrow Disposal Service Inc. for the new three-year deals.

The decline in Waste Pro’s service intensified after the company lost the contract, as workers jumped ship to find new jobs. The company offered bonuses to employees who agreed to stay on and promised to bring in extra trucks from other areas to pick up the slack, but the service never recovered.

Supervisors voted to give all the county’s 9,119 households a one-month rebate on garbage bills, a total of $14 per customer.

The search is on for trees

The Durr family of Brookhaven — Josh and Natalie with children Aliyah, Peyton and Annaleigh — searches for the perfect... read more