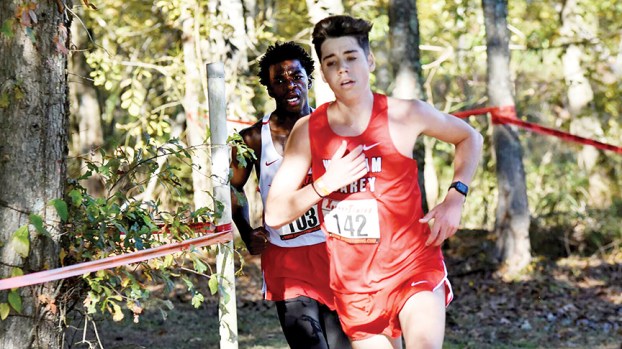 Knott is XC Freshman of the Year

Brookhaven High alum Andrew Knott was recently recognized as the Southern States Athletic Conference Cross-Country Freshman of the Year. A freshman runner for William Carey University, Knott was also named to the All-SSAC and All-Freshman Team.

Knott was the MHAAA 5A individual state champion as a senior for the Panthers as his squad also took home the 5A team title as well.

While the races that he runs as a Carey Crusader are longer than the ones that his team ran in high school competitions, there hasn’t been much adjustment for Knott.

“I always ran longer distances in high school on my own time,” said Knott. “The biggest adjustment is a different training schedule and having a different coach with a different style.”

Knott comes from a running family as his father Shannon is head cross-country coach at Brookhaven High. His mother Cathe is an accomplished runner in her own right and his younger brother Trey — a freshman at BHS — runs for the Panthers. His youngest brother Coleman is a fourth-grader at Brookhaven Elementary and is already a competitive runner.

Blake Hegstrom is the head coach at Carey and has been part of a successful build of the program as a student-athlete and now a coach.

“I’m proud of Andrew and the men’s team this year as they really found a groove on the back half of the season,” said Hegstrom. “The transition to college running can be a hard one, but Andrew did a great job of working hard and staying focused on the big picture. I’m really looking forward to his progression through his collegiate career and expect him to step into a leadership role as we progress.”

Knott finished second overall at the Allstate Sugar Bowl Cross-Country Festival on Sept. 15 in New Orleans. He finished one second behind teammate Jacob Plocher as the Crusaders finished first overall in a field of nine teams.

Running in the Greater Louisville Classic in Louisville, Kentucky was an experience that Knott calls a highlight of the season. The field consisted of 34 teams and 275 runners.

“To stand at the start line with that many people and know how many elite runners were in the field, it was a humbling experience,” said Knott.

An 8K course, Knott finished that race in 27 minutes and eight seconds which was 39th place.

At the SSAC championships Knott finished in eighth place which was just outside of qualifying for the NAIA national championships that were held last week in Iowa.

Next year the national championship will be held in the Pacific Northwest and Knott wants to be there.

“I definitely have a goal of qualifying for the national championship next year,” said Knott. “It’s going to be held in Oregon and that’s a race I want to run in. Not only me, but I want the entire team to qualify for nationals next year.”

Carey finished second at the final SSAC meet as the champions from Bethel University held them off by just two points.

Knott isn’t the only former Panther running for the Crusaders. Brookhaven High alum Antonio Dillon runs for the men’s team and another former Panther — Arnancy Arnold — competes on the women’s side.  The Carey women qualified for the national championship and ran as a team in Cedar Rapids, Iowa last week where they finished in 33rd place.

In the spring Knott will run for the Carey track team in the 5,000 and 10,000-meter distances. Right now, he’s trying to qualify for the NAIA national championship in the marathon. That race takes place in May in Gulf Shores, Alabama in conjunction with the NAIA Outdoor Track & Field Championships.

Today he’ll be running in the half marathon hosted by the Stennis Space Center in Hancock County. It’s a race that Knott has won in 2016 with a time of 1:22:09 as a high school junior. He’ll also run on Dec. 9 in the Mississippi Gulf Coast Half-Marathon in Biloxi.

Earlier this year at the always grueling, hilly Mississippi Blues Half Marathon in Jackson Knott finished in third place with a time of 1:19:31 which was a personal best.

9 Cobras selected for All-Region 8-3A team