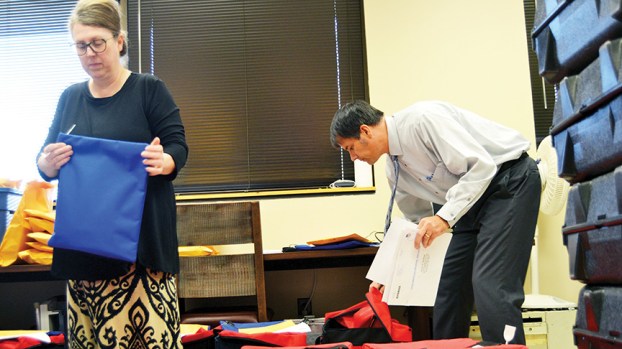 The total number of absentee ballots cast for all precincts was 930, said Lincoln County Circuit Clerk Dustin Bairfield. Traditionally, circuit clerks across the state can look at the number of absentees recorded prior to an election and give a close estimate of what the actual turnout will be. Based on such a large number of absentees collected in less than three weeks since the Nov. 6 election, Bairfield is expecting to see a staggering number of voters at the polls today.

“We will definitely make history … if we have that type of turnout,” he said.

While two races are on the ballot, most voters are expected to go to the polls today to record their choice between Republican U.S. Sen. Cindy Hyde-Smith and Democrat Mike Espy in the special election runoff for U.S. Senate.

David McCarty and Jeff Weill Sr. are also on the ballot in the general election runoff for Court of Appeals District 4 Position 2.

The Hyde-Smith and Espy contest has made national news and prompted visits by President Trump in Tupelo and Biloxi Monday to stump for the Lincoln County cattle farmer.

The Nov. 6 general election and special election brought almost 13,000 local voters to the polls — with 1,050 absentee ballots cast in a 45-day window. Typically only a third of the voters return for a runoff, but Bairfield expects at least 10,000 out of the 22,600 registered voters in Lincoln County to cast ballots today.

“Some of the campaigns got very negative so a lot of people feel like they have a reason to come out and vote,” Bairfield said.

The last two years of the Senate term begun by the now-retired Thad Cochran — who resigned in April amid health concerns —hangs in the balance as voters decide between Hyde-Smith, the former state agricultural commissioner, and Espy, a former U.S. secretary of agriculture in the Clinton administration who is seeking to become Mississippi’s first black senator since Reconstruction.

The two candidates spent Sunday and Monday rallying supporters around their themes of conservatism and moderation as they entered the closing days of their campaigns.

It’s the last U.S. Senate race to be decided in 2018 and will determine whether Republicans add to their slim majority.

The Tupelo and Biloxi stumps were part of Trump’s second trip to Mississippi on the senator’s behalf since October.

In the final weeks of campaigning, race has become a dominant issue. Espy vows to bring his experience of “diversity” and “inclusion” to the job, qualities he says are lacking in his white Republican opponent.

Trump praised Hyde-Smith Monday, saying she misspoke when she made her comments about a public hanging and the remarks were “taken a certain way but she certainly didn’t mean it.”

The U.S. senator has had several stumbles, defending herself after a photograph emerged of her wearing a replica Confederate soldier’s hat when she was still ag commissioner, as well as a video of her praising a supporter by saying she would sit on the front row of a public hanging with him.

Hyde-Smith’s support of Trump is unmistakable. Even on trade and tariffs, where Trump’s decisions could hurt Mississippi farmers, Hyde-Smith praised the president.

“I have met with the president, and I proudly support him in negotiating these trades,” she said. “All the Mississippi farmers want is a fair deal, and I’m excited that the president has stepped up to renegotiate these deals.”

About 38 percent of the state’s residents are black, and Espy is trying to boost their turnout and pick up support from white voters who are uneasy with Trump or the racially tinged stories about Hyde-Smith.

During a last-minute campaign stop in suburban Ridgeland on Monday, Espy said he was running his own race and wouldn’t be thrown off by Trump’s appearance. He has emphasized that he’s a moderate seeking the votes of everyone and willing to work across party lines. On Monday, he noted that he had crossed the “party chasm” to endorse the re-election of Republican Gov. Haley Barbour in Mississippi in 2007.

The race is expected to drive a higher-than-usual turnout for a runoff in Mississippi. More than 43,000 absentee ballots have been requested statewide, and that number could increase as final numbers are tabulated Monday. About 69,000 absentee ballots were requested before the Nov. 6 election, which saw the highest number of votes in any non-presidential election in Mississippi. There’s typically a decrease in ballots cast between the first election and a runoff.

Mississippi last elected a Democrat to the Senate in 1982.