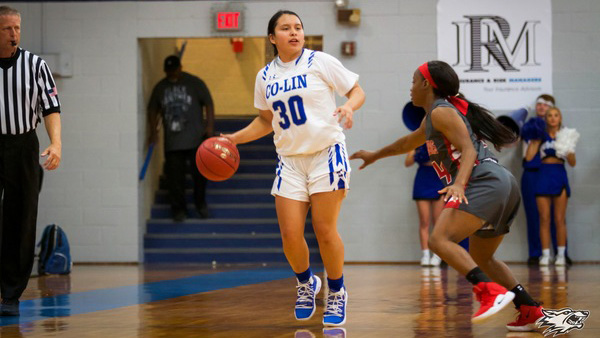 Despite two starters fouling out and rebounding woes, the Lady Wolves of Copiah-Lincoln Community College escaped J.T. Hall Coliseum in Moorhead with an 87-68 victory over the Mississippi Delta Community College Lady Trojans on Monday.

The win moved Co-Lin to 6-0 on the young season and dropped the Lady Trojans to 1-5. The Lady Wolves have another road test on Thursday, as the team travels to Camden, Ark. to take on Southern Arkansas University Tech.

“We didn’t block out and let them get a lot of second-chance shots,” said Co-Lin head coach Gwyn Young. “We didn’t run our offense very well, but our shooting percentage was really good, especially in the first half. You can’t just rely on your scoring though to win every game…we have to do a lot better job.”

Two minutes into the game action was back-and-forth as the game was tied for the second time at 5-5. Co-Lin fired off a 13-2 run over the next six minutes led by Sha’Quandra Carter. The offensive burst pushed the Lady Wolves to an 11 point, 18-7 lead with just 3:45 left in the first quarter.

The Lady Trojans fought back and early in the second had chipped away at Co-Lin’s lead. With 7:59 left in the second quarter the lead had dwindled to just three, 26-23. A big three from TaMara Riley and a layup from Ciara Norwood helped break the Mississippi Delta offensive rally and put Co-Lin back in a commanding lead.

Co-Lin struggled all night with fouls and rebounds. The Lady Wolves recorded 27 personal fouls and sent the Lady Trojans to the free throw line for 32 shots. Co-Lin also entered the game the third best rebounding team in the nation but were outrebounded by the Lady Trojans 51 to 49. The team’s 49 percent (35-of-72) shooting performance helped counter these struggles and lifted the Lady Wolves to the 87-68 win.

TaMara Riley led Co-Lin in both scoring and rebounds with 22 points and nine rebounds, while Camryn Davis added 18 points and seven boards. Sha’Quandra Carter rounded out the top scorers with 16 points. Darien Tubby also had a career-high 11 assists on the night.

Raelen Shelvin led Mississippi Delta with 16 points while Artavia Tate finished with a double-double after posting 15 points and 13 rebounds.