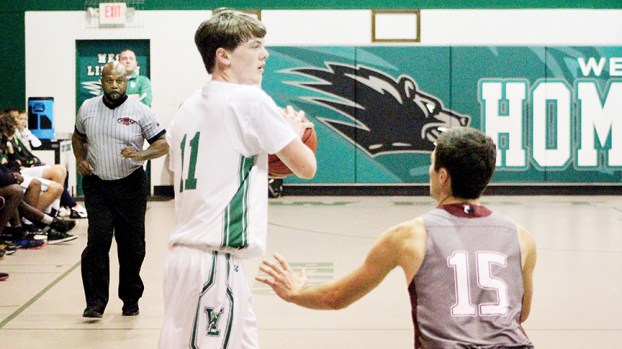 Photo by Cliff Furr West Lincoln junior forward Karlton Byrd looks to pass over the defense of Puckett guard Austin May. Byrd scored 18 points for the Bears in a 73-47 in a win over Puckett on Tuesday night.

“Do you think we’ll win a game this season?” asked one Puckett fan of another as they walked down the bleachers just before the final horn on Tuesday night at Jack Case Gymnasium.

The question was met only with a shrug as the homestanding West Lincoln Bears (2-3) had just finished a dominating 73-47 win over the visiting Wolves from Puckett (0-6).

The game was close in the first quarter, as WL led 16-13 after the first eight minutes. The Bears had started a lineup that was different from their usual first five, as junior post player Keshon Byrd stayed on the bench until the beginning of the second quarter.

Once Byrd entered the game, things changed for the Wolves, as they had no answer for his inside presence. He gathered rebounds, blocked and altered shots, and scored any time the ball found him close to the basket. Byrd finished with 18 points.

Junior forward Karlton Byrd — no relation to the bigger Byrd — carried the early West Lincoln offense with nine first-quarter points. Karlton is a crafty passer and has deceptively quick hands on defense. Four times against Puckett he scored baskets that resulted in his defender being called for a foul. Karlton Byrd finished with 18 points as well.

“We need for Karlton to be more aggressive on the offensive end,” said West Lincoln head coach Brooks Smith. “When he’s playing with confidence and distributing the ball it makes us better.”

Playing inside-out — passing the ball in to Keshon Byrd and making the defense collapse — is another offensive strategy that Smith wants to see his team continue to use.

“Getting the ball inside first opens things up for our shooters,” said Smith.

Senior guard Garrison Coffey was the hot man from the perimeter for Smith, as he finished with a game-high 22 points. Coffey knocked down four first-half three-pointers and added another in the fourth quarter. Jatavian Lewis added 10 points off the bench for the Bears.

West Lincoln led 37-24 at halftime and outscored Puckett 16-6 in the final period.

Puckett won’t go winless this season — they lost by just two points in their previous game against Lamar Academy — but with just one senior on their roster and no player much taller than 6 feet, they’ll have games like Tuesday when they are overmatched.

“It was good to get the win tonight,” said Smith. “Before the Thanksgiving break we played at St. Andrew’s and didn’t compete against the defending 3A state champs (an 84-43 loss). We play Wesson here on Friday and it will be a good test for us to see how much we’ve improved since we played them in the season opener.”

The Puckett Lady Wolves (5-1) are one of the top MHSAA 2A teams in the state. That’s exactly why West... read more