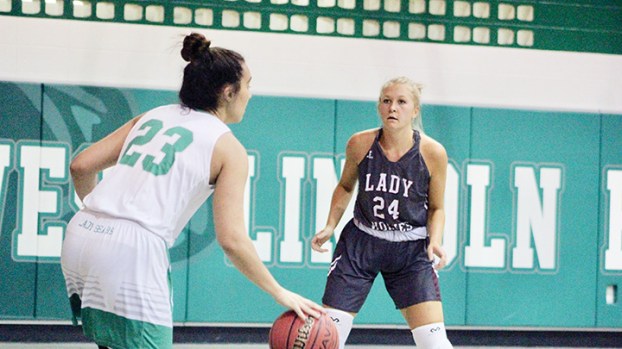 Photo by Cliff Furr Megan Gerald of West Lincoln looks for options while being defended by Rose Warren of Puckett on Tuesday night in Jack Case Gymnasium. Warren scored a game-high 28 points in a 69-47 Puckett victory.

The Puckett Lady Wolves (5-1) are one of the top MHSAA 2A teams in the state.

That’s exactly why West Lincoln (3-1) coach Brooks Smith kept Puckett on the schedule when he took over as head coach last season. On Tuesday night at Jack Case Gymnasium, it was the Lady Wolves who used a strong second half to take a 69-47 win over West Lincoln.

Last season, Puckett finished 27-3 and beat West Lincoln 66-54 in a regular season matchup in Rankin County. The Lady Wolves were knocked out of the playoffs in the quarterfinals by New Site. Head coach Holly Moncrief is 136-53 since taking over in 2012 at Puckett. One of her former players — forward Kelley Allen — was recently a standout at Copiah-Lincoln Community College and Mississippi College.

This season Puckett is led by a formidable junior duo in point guard Rose Warren and forward Alliyah Gray. At 5-foot-9, Warren is a tough matchup for most teams at the point. On Tuesday she led her team with 28 points in keying the Puckett offense. Warren nailed two first quarter three-pointers and went 10-of-16 from the free throw line.

Gray is a quick-jumping, athletic 6-foot forward that operates close to the basket. On Tuesday she scored 21 points and was an important cog whenever the Lady Wolves turned up their defensive pressure.

West Lincoln led most of the first quarter, as they got nine points in the period from junior forward Bailey Wilson. With the game tied 18-18 and the first-quarter clock running down, Warren canned a long three-pointer that put her team up 21-18 just before the horn. Puckett led 32-25 at halftime.

“Last year when we played at Puckett they overwhelmed us early and we were out of the game by the end of the first quarter,” said Smith. “Tonight, I told the girls the goal was to be right there with them late and I think we played decent for three quarters. We didn’t shoot the ball well enough tonight.”

The game was tight late in the third quarter before a Puckett surge signaled things to come. With just under a minute remaining in the period, the Lady Wolves led 43-36, but a quick jumper by Warren and then a steal and layup by Gray would be a foreshadowing of a fourth quarter that saw Puckett outscore West Lincoln 22-9.

When Puckett needed a surge on Tuesday, they went to a three-quarter court trap that sped up the Lady Bear offense and caused turnovers for the home team. Puckett also did a good job of shadowing West Lincoln shooter Skylar Hall and denying her clean looks at the basket.

West Lincoln will host Wesson on Friday and then take part in the county tournament next week. The Lady Bears will then have a demanding three-game stretch in which they will host Mountain Brook (7-1) (Alabama), host South Pike (3-0) and travel to North Pike (5-1) in a seven-day period.

“We’ve got to do a better job of handling pressure,” said Smith. “We’ve got some stuff to clean up. This was a good learning experience for us.”

Brookhaven High The Lady Panthers picked up their first win of the season with a 3-2 victory at Laurel. In... read more