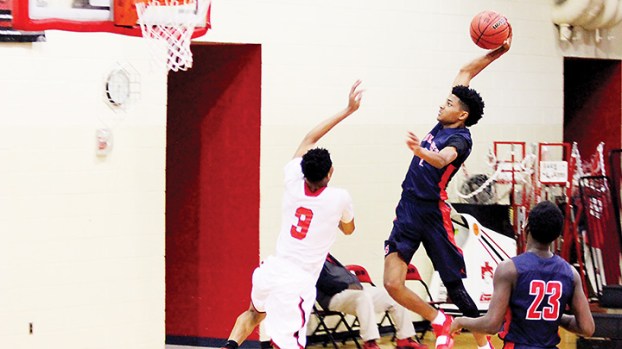 Photo by Becky Green Brookhaven High junior guard Jermario Hersey leaps toward the basket against Brandon. Hersey scored 10 points for the Panthers Friday night in their 78-76 victory at North Pike.

The Brookhaven High School Panthers earned a sweep of their 5A brethren North Pike on Friday night in Summit.

In the girls’ game, the Lady Panthers (8-0) used their trademark smothering defensive pressure to remain unbeaten with a 54-36 victory over the Lady Jaguars. The boys’ game was a tight one, with the Panthers (7-1) making plays down the stretch to hold on to a 78-76 win over North Pike.

“We came out with great defensive intensity,” said Lady Panthers head coach Preston Wilson. “There were double- and triple-teaming Tamia Stallings early, but Ayanna McNairy was able to hit some shots from the perimeter early and that got us going.”

Junior forward Silentianna Collins led the Lady Panthers with 15 points, and McNairy added 13 by going 3-of-5 from the three-point line. Senior forward Stallings was held to a season-low five points, but did grab 11 rebounds. Collins handed out six assists and Ashanti Louis dished out five.

“Ashanti continues to be our motor on defense,” said Wilson. “It was a good win on the road.”

It was only the second loss of the season for North Pike (7-2), who had beaten Loyd Star 41-38 at home on Thursday night.

In the boys’ game the Panthers clawed back to grab a win after trailing 9-0 to start the game. North Pike led 42-39 at halftime, but a 20-16 third quarter gave Brookhaven a one-point lead entering the final period of play.

The game was a showdown of sorts between two of the best scorers in the area. North Pike junior forward Alijah Martin is a name most might remember from the football field, as the talented, lanky quarterback is the engine that makes the Jaguars go. He’s just as good on the hardwood, as Martin scored a team-high 28 points to lead the Jags.

“Proud of the guys fighting back,” said Panther coach Marcus Flippin. “It was a hard-fought game.”

Brookhaven hosts 6A Terry High tonight in Sinclair Gymnasium. The Terry girls are currently 9-2 and the boys have a record of 5-6 after dropping two-of-three games last week at the Crystal Springs Tournament.