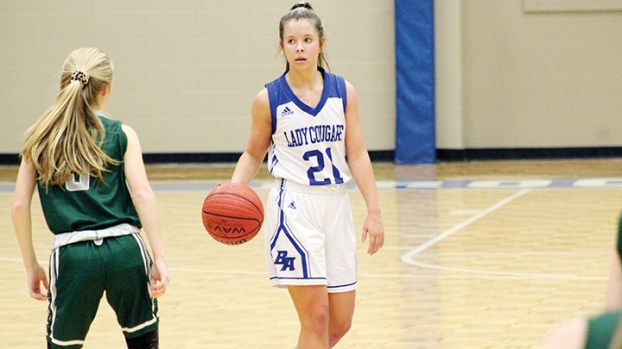 Photo by Cliff Furr Freshman point guard Anne Brantley Warren runs a play for the Brookhaven Academy Lady Cougar offense against Bowling Green at the BA Thanksgiving tournament. On Saturday Bowling Green would get revenge for that earlier defeat by beating BA 58-53 in Franklinton, Louisiana.

Brookhaven Academy split its Saturday night trip to Franklinton, Louisiana, with Bowling Green, as the Lady Bucs topped the Lady Cougars 58-53 and the BA boys held off Bowling Green 36-24.

The schools were longtime basketball rivals and district mates, and for years Cougars fans would plan their trips to Franklinton around a stop at Gerald’s Seafood Buffet.

Gerald’s has a new name and owner, but Bowling Green is still a difficult place for opposing teams to pick up a victory.

Two weeks ago, the Lady Cougars (5-2) handled Bowling Green on their home court in their Thanksgiving tournament, but the Lady Bucs would use their defensive pressure to make the Lady Cougars work for baskets on Saturday night.

Bowling Green made 17 free throws in the fourth quarter.

“I’m proud of how the girls fought,” said Lady Cougars head coach Jason Case. “We know we have to improve in certain areas to become who we want to be as a team and I’m sure we will get there soon.”

The boys’ game at the BA Thanksgiving Tournament saw the Cougars flying down the court as they blitzed the Bucs for an early 20-point lead on their way to a blowout win. Bowling Green slowed the pace down on Saturday in order to prevent that from happening again, but the Cougars still did enough to win.

“It wasn’t our best performance, but under the circumstances of playing on the road, we did what we had to do to win,” said BA head coach Josh Watts. “We did a good enough job of putting pressure on them in the half-court to get some turnovers and convert in transition.”

The Wesson Cobras and West Lincoln Bears met for the second time this basketball season on Friday night, this time... read more