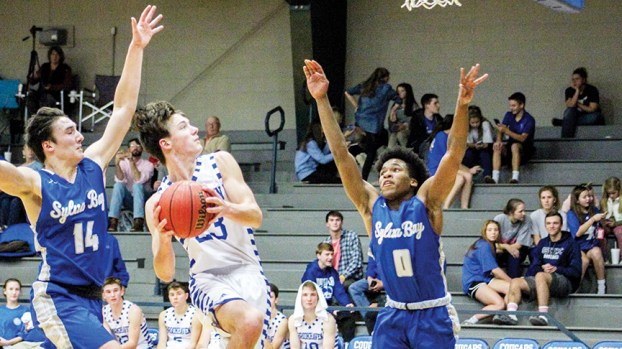 Photo by Emily Phillips Tyler Fortenberry of Brookhaven Academy glides in against the Sylva-Bay defense on Tuesday night in John R. Gray Gymnasium.

The Brookhaven Academy Cougars got their district schedule started on Tuesday night by hosting the Sylva-Bay Saints from Bay Springs. The Lady Cougars overmatched the Lady Saints on their way to an easy 48-27 victory, and the boys’ game was also a blowout as the Cougars won going away 62-28.

The opening minutes of the girls’ game conveyed one thought — speed is everything. The Lady Cougars established dominance when choosing to run a full-court press against the Lady Saints. The rotations and man-to-man defenses that came with the press allowed the Lady Cougars to put up the first 18 points from transition scores and baskets off turnovers.

“We knew we had to come out hard and get ahead first,” said Lady Cougars senior Jana Case. “Playing this hard prevents them from getting too close, and we didn’t want that.”
The Lady Cougars led 40-1 at halftime and that allowed their underclassmen to get ample playing time.

“This was a district game and a lot was riding on it,” said senior Macy Grace Smith. “We knew we needed to win, period.”

The story of the boys’ game was the outside shooting of the home team. Five different Cougars contributed to the eight three-pointers made by BA.

“We came out and ran the offense the way we needed to and made good choices,” said senior forward Dawson Flowers. “Now that I’m done with football I can actually get in the gym and practice my three-pointers and focus on improving my shot.”

The second half was more of the same, with BA controlling the floor and boards. Coach Josh Watts also had the opportunity to allow some of his younger players court time and show what the future holds for the Cougars.

“I was guarding a very good player, and with a player like that you have to deny them the ball and try not to let them get it back,” said Cougar guard Britton Nelson.

The Brookhaven High Lady Panthers kept up with their unbeaten ways on Tuesday night as they defeated visiting 6A Terry... read more