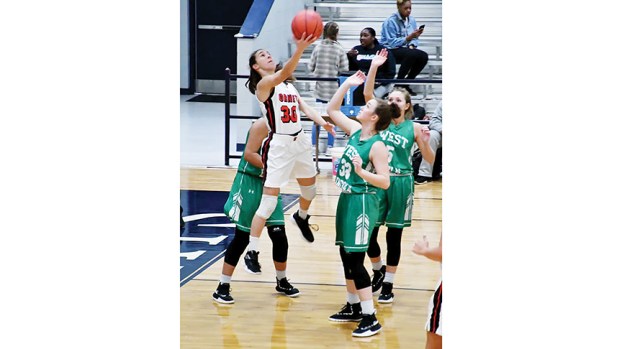 Photo by Stacy Leake Aubrey Britt of Loyd Star leaps at the basket as she is surrounded by West Lincoln Lady Bears Tuesday at the Lincoln County Tournament.

The 2018 Lincoln County Basketball Tournament kicked off Tuesday at Bogue Chitto with West Lincoln sweeping Loyd Star in the first pair of matchups, and the host Bobcats besting Enterprise in the two late games.

The Lady Bears rebounding and defensive take-aways were the key for them picking up the win in the first game of the tournament.

“We made the shots when we needed to,” said West Lincoln coach Brooks Smith. “I thought the first and third quarter we slacked off a little bit, but I thought our seniors stepped up. Bailey Wilson had a good game for us. I was very satisfied with the win.”

West Lincoln started off the game on a 5-0 run before Loyd Star junior Taylor Smith put her team on the board. Lady Hornets senior Christie Patterson followed up with a basket of her own to bring Loyd Star within one point.

The Lady Hornets would eventually tie up the game at eight-all when senior Sarah Britt scored with three minutes left in the first quarter.

Loyd Star held onto a 13-11 lead at the end of the first quarter.

The Lady Bears quickly tied up the game to start the second period as Katelyn Dickerson knocked down a basket.

West Lincoln would start to grow their lead and take a 30-15 lead into halftime.

The Lady Hornets fought to cut into the lead but found themselves down 44-28 heading into the final frame.

“West Lincoln is a good shooting team,” said Loyd Star coach Christi Terrell. “We had a good first and third quarter, but you can’t score two points in the second quarter and win the ballgame.”

The boys’ game was a back-and-forth affair with plenty of lead changes and ties.

West Lincoln coach Brooks Smith was pleased with the fire his team showed in the win.

“When we play tough and with effort and out hustle the other team, we’re pretty good,” said Smith. “I thought we did that enough tonight to pick up the win.”

“Got to tip your hat to West Lincoln,” said Loyd Star coach Seth Britt. “They came out shooting the ball well and we didn’t. We didn’t play defense very well and you can’t win by only scoring four points in the fourth quarter.”

The Bears were led by Anthony Hughes with 17 points and Karlton Byrd with 16 points.

The Lady Bobcats pressure proved to be too much for the young Lady Jackets to handle, as Bogue Chitto cruised to the finish line.

“We didn’t do a good job handling Bogue Chitto’s pressure,” said Enterprise coach Shane Adams. “We had way too many turnovers and missed way too many shots.”

The Lady Yellow Jackets hung in early in the game, trailing 5-4 halfway through the first. That would be the closest they would come to the Lady Bobcats.

Bogue Chitto’s defense created turnover after turnover, as the Lady Bobcats built a 24-6 lead at half time.

The Lady Bobcats were led by Kaitlin Poole with eight points and Katelynn Palmer also had eight points.

The game was one of two different halves.

Enterprise played good defense through the first half, but Bogue Chitto’s defense came to life in the second half to take control of the game.

“Patience from both the players and the coaches is what it’s going to take for us,” said Bogue Chitto coach Marvin McGee. “They players are working and improving, but we’ve got still got more work ahead of us. Tonight was a good win.”

The Yellow Jackets started out strong, taking a 5-1 lead early in the game. Bogue Chitto fought back to close the gap to 7-6 at the end of the first quarter.

The Bobcats came out of the second half and tied the game up off a basket by Josh Thomas and broke the tie with two Zach Upkins made two free throws.

Bogue Chitto would start to separate from the Yellow Jackets as the third period rolled along and they held a 40-29 lead after three quarters.

“Just like in the girls’ game, we didn’t do a good job handling the pressure,” Adams said. “We missed too many free throws towards the end of the ball game and it cost us.”

The Bobcats were led by DaMarcus Godbolt with 20 points. Upkins netted 14 points and Markee McGee had 12 points.

The Yellow Jackets were led by Taylor Presley with 13 points. Jalon Grinstead and Peytin Jergins each had nine points.

The Lincoln County Basketball Tournament will continue on Thursday, with games starting at 4 p.m.

The Brookhaven Academy Cougars got their district schedule started on Tuesday night by hosting the Sylva-Bay Saints from Bay Springs.... read more