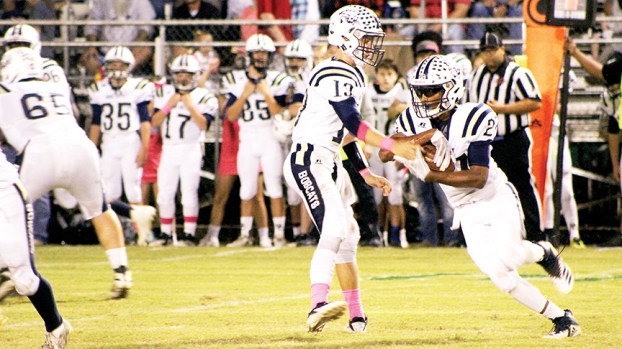 Photos by Cliff Furr Bogue Chitto running back DaMarcus Godbolt takes a handoff from quarterback Shaw King. Godbolt and King are two players that will be featured in The Daily Leader All-Area team this weekend.

371 – High school football student-athletes from our coverage area who suited up in 2018. Those numbers are from Max Preps and are in no way 100 percent accurate, but they do give a good idea of how popular football still is in Southwest Mississippi. Football participation is trending downwards in many parts of our country. It’s doubtful if that will ever be the case in Mississippi where football is seen as the only diversion for most in our rural state and a path towards a college education for many.

83 – Yards run by Lawrence County’s Tywan McLaurin on a fumble return against Sumrall. McLaurin ran up and took the ball out of the hands of Sumrall All-American quarterback Dannis Jackson. The play came late in the fourth quarter of a one of the two best games I witnessed this season.

15 – Games watched in person by your sports editor. I saw every team in the area at least once, all but one school twice, and many three times. I also saw a game on each home field in the area. The best concession stand hamburger goes to West Lincoln. Please do not send me hate mail on this opinion.

90 – Area games that had a story written about them in the weekend paper. Some may have been brief, but every Saturday you were able to read about the games from Friday night. Lifestyles Editor Brett Campbell was the Friday Night MVP for his patience in putting the pages together.

2 – Games canceled by severe weather. Brookhaven Academy and Cathedral was called after lightning moved into the area. On the same night — the first Friday of the season — Wesson at Crystal Springs got called due to a strong storm system. Lawrence County and Loyd Star also had games that had long delays due to lightning this season.

80 – Yards run by West Lincoln freshman running back Enrico Price on a touchdown dash against Loyd Star. Price hurdled a diving defender, ran towards the sideline at full speed, and changed direction just before the out-of-bounds line. The Loyd Star defense had slowed down thinking Price would be forced out of bounds by his momentum, but he turned up the sideline for the long touchdown run. Loyd Star won the game and the region, but that play by Price was one of the most impressive I saw all season. It is very exciting to know that area fans still have three more years of watching Price carry the rock.

1 – Games this season that did not get a story written about them. I couldn’t get Wesson coach Jeremy Loy on the phone after his Cobras lost at Seminary. The plan was to run a story on Tuesday, but when that day came I forgot. Loy, who I see every Sunday at church, was OK with my mistake as he was ready to forget about the eventual South State Champion Bulldogs and move on to the next game.

19 – Yards of the game winning field goal by Corey Case in the BA versus Centreville game. The win was a huge one against a bitter rival and the freshman kicker calmly booted the game winner with less than 20 seconds remaining. This one was also one of the best games I saw this season.

17 – Catches by BA wide receiver Cade Brown in the Centreville game. Brown was a one man wrecking crew and set up the game winning kick by Case with a big reception previously on the drive.

1 – The number of phone conversations I would have every week with each area coach. Usually on Wednesday night to preview the upcoming game that week, I very much appreciated them carving out that brief amount of time for me in their schedules every week. It’s not always enjoyable to talk to someone after you lose or when you’re on the bus or especially when you’re on the bus after a loss. The coaches in this area are professional and accessible and that makes the job easy.

2,214 – Approximate miles traveled by Brookhaven Academy this season for their road games. The Cougars went to Montgomery, Alabama for an exhibition game to start the season. They travelled to Batesville in the second week of the season to play North Delta Academy. In the playoffs they made a trek to Greenville and don’t even mention the time they went to extreme North Louisiana to play a team in a glorified cow pasture. You’d put less miles on your car if you drove from Lincoln County to Lincoln, Nebraska and back.

8 – Points scored by Amite County against Bogue Chitto. The Trojans scored 46 against Loyd Star, 58 versus Enterprise, and 44 against West Lincoln. However, the Bobcats played like their namesake and shutdown what had been a potent Amite County passing attack. The blowout win was one of the most impressive team performances I saw this season.

2 – Times I heard the classic song “Neck” by Cameo performed by high school bands this season. You might not be able to play “Neck” in Tiger Stadium, but North Pike and Amite County both tore through the crowd pleaser and sang along with the lyrics. The band, cheerleaders and JROTC create a vibe on Friday nights that sets the mood. Without them the atmosphere would be a much different and lesser scene.

1,000 – Thanks to the people who worked hard on our Friday night high school coverage. Stringers Dave Linton, Rusty Newman, Paden Phillips, Craig Davis, Ricky Myers and Steve Cooper along with photographers Emily Phillips and Katie Furr were the engine that drove the boat. Every school has people in their community that you know will bend over backward to shine a light on their students. Brian Emory, Sherry Davis, April Clopton, Christy Boyte, Marsha McCaffrey, Stacy Leake, Shane Adams, Chase Wallace, Beck Warren, Shannon Aker, Lisa Smith and Courtney Myers are all examples of those types of people — the best parts of Southwest Mississippi.