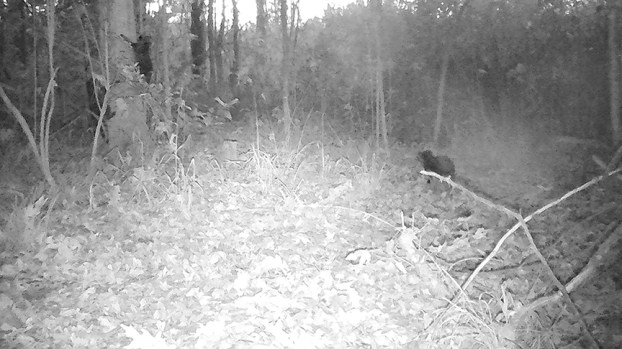 Photo submitted This photo from Ron and Jackie Hart Weger’s trail camera shows what the Wegers believe to be black bear cubs behind their home on Greenview Trail.

The dogs went wild, but she didn’t think anything about it.

The four little Shih Tzus — Bandit, Caesar, Cooper and Winston — went to scratching at the backyard fence and barking in a chorus of alarm, but Jackie Hart Weger is used to her little watchdogs going haywire at wildlife in the woods behind their home on Greenview Trail in southern Brookhaven. It was around 5:20 p.m. Tuesday, and she let them in the house to shut them up, thinking they were harassing the squirrels.

Then her husband, Ron, checked his game camera the next morning and saw what the Wegers believe are black bears.

“I thought, ‘Holy cow — so that’s what got the dogs crazy,’” he said. “They were right behind the garage, right up by the house. We keep the camera up just because we like to watch the rabbits and coons and squirrels and fox, just to see them come through.”

Instead, Weger’s Tasco game camera caught a single image of what may be three black bear cubs — two climbing up a dying hardwood while a third ambles around Weger’s scattered deer corn — though it’s hard to tell from the photo. The time stamp is 5:21 p.m., after darkness had fallen, and the camera made the shot in infrared mode, giving the picture a ghostly, grayed-out quality.

The Wegers are originally from Michigan’s Upper Peninsula, home to around 11,000 black bears, and say they know a black bear cub when they see one, or three.

Jamie Holt, biologist for the Mississippi Department of Wildlife, Fisheries and Parks’ black bear program, isn’t convinced. When shown the trail camera photo Friday, he said the right-most animal is “iffy,” but the two figures scaling the tree on the left of the photo are raccoons.

“I do not doubt bears and other signs being seen in the area at all, but I don’t think that’s what we are looking at in this particular picture,” he said.

If the three dark shapes lurking around Greenview Trail were black bears, Holt said they would be Louisiana black bears, which are found in the Southwest Mississippi area while the American black bear hangs around the rest of the state. The bear population statewide is low — between 200 and 250, Holt said — but the animals have been slowly growing and establishing themselves for years.

Black bears are being seen with more regularity around Mississippi. A motorist recorded video of a black bear crossing U.S. 61 in the Delta earlier this summer, and a black bear may have been responsible for damaging a woman’s car in Lawrence County in February. A bear was seen roaming around in Natchez last April, and that same month a state record-sized bear was struck and killed by a vehicle in Wilkinson County.

The bear was mounted and is on display at MDWFP headquarters.

Holt said bear encounters in Mississippi are rare, but won’t be forever.

“For some people over in the Delta or around Vicksburg, seeing a bear is nothing out of the ordinary,” he said. “They’re beginning to be more common in (the Brookhaven) area, starting to reestablish in Southwest Mississippi.”

If anyone does encounter a black bear, Holt said never, ever feed them.

Bears are omnivorous, but most of their diet in Mississippi consists of vegetation — plants, acorns, hickory nuts, pecans, berries. They aren’t predatory by nature, Holt said, but love to eat seeds and will be happy to check out a birdhouse or deer feeder, even a barbecue grill or smoker.

“Bears have a phenomenal sense of smell — they can pick up a scent from a mile away. If your fresh barbecue is just cooling off, they’re liable to come check that out,” he said.

Black bears won’t come carry off your dogs and cats, but could end up sparring with a dog if the canine decides to protect its food bowl from a curious bear. Holt said pet owners in areas where bears have been sighted should take up their outside dog’s food and bowl after feeding, and make sure garbage is secured and taken to the road the morning of pick up, not the night before.

Hunters who have black bears wander into their hunting grounds should empty out deer feeders and close them down to get the animal to move on, otherwise it will just keep coming back for an easy meal. Black bears are a protected species in Mississippi, and shooting one is out of the question unless a person is in danger. Anyone who shoots a black bear will have to tell the game warden a convincing story, Holt said.

Anyone who encounters a bear while walking, or has a bear intrude into their yard, should make large gestures and lots of noise — blow the car horn, bang pots and pans together, shout like a wild man — to scare it away. A black bear’s first instinct is to run, Holt said. He said even a mother would run before she fought for her cubs, unless she felt cornered.

Brookhaven Animal Control Officer Roxanne Norton said black bears are in the Brookhaven area, and asked anyone who sees a bear to contact Brookhaven police at 601-833-2424.

“I’ve been seeing signs all over the woods and had some reports. It’s just a matter of time before they start moving into town,” she said. “”If you see a black bear, let us know so we can keep an eye out and make sure they keep on moving. Stay away from them, do not try to approach them and please do not feed them.”

Anyone who sees a black bear is also asked to report it online at the MDWFP Black Bear Program website.

Falvey concerned board not following guidelines

It’s the little things that bother him. Lincoln County is getting new radios for its volunteer fire departments, keeping the... read more