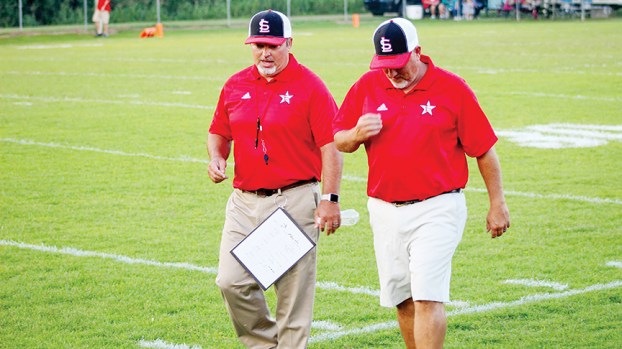 Photo by Katie Furr Loyd Star coach Brian Ford (left) confers with assistant coach Scott Leggett as they enter W.E. “Sambo” Smith Field. Ford has been named The Daily Leader All-Area Coach of the Year after leading the Hornets to a 7-4 record and region title in 2018.

With impressive season, Loyd Star head coach is The Daily Leader All-Area Coach of the Year

It was the best season for Loyd Star football in nearly a decade.

In 2018, the Hornets secured a 7-4 overall record, the Region 7-2A championship and the first winning record and home playoff game for the school since 2009. Loyd Star coach Brian Ford trotted out a gritty team that overcame numerous obstacles throughout the season.

For his leadership, Ford has been named The Daily Leader All-Area Coach of the Year.

“I knew when I got here that we had the pieces to have success this season,” said Ford. “Last season (4-7) was about the kids and myself learning each other. I knew we’d have a physical offensive line this year and I thought our skill positions had developed a lot since last season.”

Running out of a Power-I formation, the Hornets averaged 300 yards rushing and 100 yards passing per game. Senior signal caller Dane Smith was confident in running the offense and Loyd Star had options in the backfield to carry the ball. Many of the key players on offense did similar work on defense, and the team was led by a talented 15-member senior class.

As good as the season was, it was mired by injuries to starters. Senior Jared Smith, a leading returning tackler, barely played before suffering a serious leg injury. Senior Logan Smith emerged as a receiving threat in his first year on the team, only to see his season cut short by an injury. Running back Quan Berry was one of the most experienced senior running backs in the area, but missed nearly the entire season after injuring an ankle in the first month of play. Senior Zach Baker was a force at fullback early in the year before — you guessed it — a serious leg injury.

The highs of the season were great, but the lows of seeing players injured took a toll on Ford.

“I take it personally when my guys get hurt,” said Ford. “They’re out there playing for me, doing what I’m asking them to do and when they hurt I feel that pain. It’s a credit to the rest of the team and our coaching staff that we were able to stay positive. Our coaches never hung their heads, they just kept working and coaching the guys up.”

It was the positive impact of high school coaches that drew Ford to the profession. Early in his high school years at Forrest County AHS, he was coached by legendary Pine Belt football coach Perry Wheat. Assistants on his high school staff included Teddy Dyess and Larry Dolan, two future state championship-winning coaches.

It was an encouraging word from Dyess in his senior year that helped push him towards coaching.

“I grew up behind the football field in Brooklyn,” said Ford. “We were at every game and watched practices when I was just a kid. My senior year, Coach Dyess asked me what I was planning on doing after I graduated. I told him I wasn’t sure. He told me he thought I’d make a good coach and that’s part of the reason I chose this path.”

Dyess would go on to build a powerhouse program at Lumberton. He won two state titles before leaving for Philadelphia. Ford took over at Lumberton in 2009 after a successful run as the head coach at Perry Central. His 2010 Lumberton team went 15-1 and won the 2A state championship with a 26-24 win over Calhoun City.

“The community support from Loyd Star was special this year,” said Ford. “Our cheerleaders, band and parents worked so hard to make the atmosphere special. Our kids fought hard all season long and it felt great as a coach to see their work pay off. I think our guys learned a lot about overcoming adversity and how to keep fighting through it.”