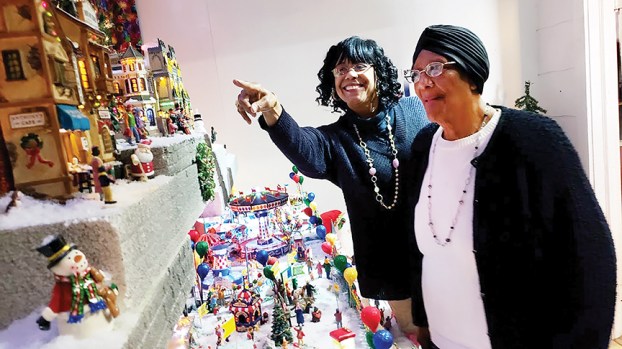 Photo by Donna Campbell Carolyn Kees shows her mother, Earline Williams, an interesting scene in the Christmas display at Southern Foot Care this week. The three-tiered diorama includes hundreds of miniature people and accessories gathered around dozens of buildings.

Gail Garbo’s cat enjoyed pushing the tiny people off the sidewalk to watch them fall onto the floor.

That’s why she moved her Christmas village from her house to her husband’s podiatry office.

Garbo thanks her frisky feline for starting a tradition that continues to bring gazes and praises from her husband’s patients each year.

“Our patients start asking in October, ‘Where is the snow?’” she said.

Garbo’s three-tier snow dusted Christmas diorama is open for public viewing at Southern Foot Care at 427 N. Jackson St. during business hours, Monday through Thursday from 8 a.m. to 5 p.m. School and church groups are welcome to schedule weekend viewings. Call her at 601-833-4815 to schedule tours.

While some decorators have a few buildings, some people on snow-lined streets and an ice-skater or two in their villages, Garbo goes a step further. Her display includes dozens of buildings and hundreds of accessories — people, pets, scenery, carnival rides, billboards and signs. It’s like a “Where’s Waldo?” print in 3D.

Patients enjoy seeing the many scenes and discovering new parts of the display each year.

Garbo keeps a box next to the display for donations to Brookhaven Animal Rescue League. She doesn’t get a lot, but every little bit helps, she said.

One of the sections of the display pays tribute to the animals, complete with the transport van that is used to take dogs to other areas to find forever homes.

There’s also a few personalized scenes, like the one she made for her friend Anna. It’s a blonde at a wine-tasting booth at a carnival.

Some of the pieces reappear from year to year, but in different scenes. The carnival that was the main feature of the display moved to the middle level. A parade stretches across the bottom level, while the top of the display is a replica of a downtown cityscape with shops, restaurants and churches.

Garbo has collected so many pieces that she created a few scenes in the waiting room using vintage televisions as her canvas.

There is a nativity scene along with a resurrection and Easter scene. A scene from “Frozen” fills another television. This year, Garbo created something specifically for motorcycle enthusiasts — a Harley Davidson scene.

She unboxes the pieces — most are Lemax — in October and creates a design for the village. It takes her about three weekends to finish the many displays. She’ll usually keep it out until February, though she left the Nativity out all year “just because,” she said.

Garbo started creating the Christmas village displays 18 years ago, when her husband, Dr. Joseph Garbo, gifted her with her first piece.

That piece is special and is put up at home. It’s on display, but far from curious hands and paws, she said.

She’s purchased other pieces and many have been given to her.

“Once people find out you collect something, you’ll get it. That’s what every body buys you,” she said.

The dogs went wild, but she didn’t think anything about it. The four little Shih Tzus — Bandit, Caesar, Cooper... read more