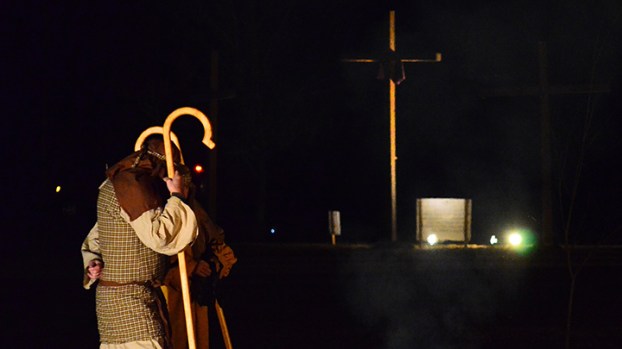 Daily Leader file photo The live nativity at New Sight attempts to tell the full story of Jesus, from birth to death and resurrection.

Visitors to the live nativity in New Sight must literally slow down to get the full effect of the Christmas story.

In the hustle and bustle of the holidays, it’s exactly what organizers are hoping for.

The line for New Sight Baptist Church’s annual Christmas spectacle begins at least a half hour before the show starts, which is 6 p.m. Friday, Saturday and Sunday. Admission is free.

Organizer Brenda Foster is glad to see carloads of people creeping through the Christmas village because it gives them time to ponder the reason for the season — Jesus.

The village is set to shut down around 8:30 each night, though Foster said that’s just a suggestion.

“We’ll stay out there as long as people are coming through,” she said.

This is the 15th year for the Christmas village of approximately 20 scenes set up around the church’s circle drive on Forest Trail Northeast.

At its busiest, traffic is bumper-to-bumper looping around the displays. Motorists can drive through the scenes and see the whole thing in about 10 minutes, though Foster said visitors are welcome to get out and ask questions. The volunteer actors are mostly from New Sight, though members of other churches are lending a hand as well, she said. It takes about 130 people — including the 70 cast members — to put on the show. A few barn animals — sheep, cows and chickens — make appearances as well.

More than 2,600 people were part of the three-night procession that circled the church grounds last year. That’s way up from numbers six years ago, when Foster estimated only about 800 drove through the village scenes.

Though it takes weeks of preparation and long hours in the cold to recreate the scenes from the New Testament, Foster believes it’s all worth it.

“We kind of get discouraged sometimes, it takes so many hours. But that’s what God tells us, ‘Go and tell.’ And that’s what we want to do. We want to go and tell. And we show it,” she said.

Foster is still looking for a few volunteers to help fill in a few spots in the village. To volunteer, call her at 601-754-3107 for details.

Attorney: Retiring Judge Patten ‘made us do it right’

The worst place to be in Judge Ed Patten’s courtroom is on the receiving end of his stare. The chancellor,... read more