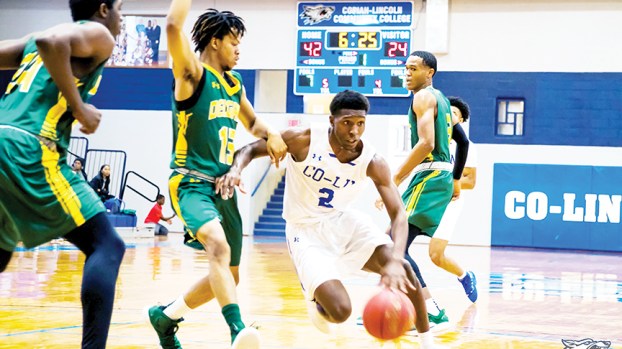 A strong first half helped lift the Wolves to a 91-82 victory over the Delgado Dolphins this past weekend. The win improved the Wolves to 7-2 on the year and dropped the Dolphins to 2-7. The game concluded the first semester of play of the Wolves. Co-Lin is back on the court Jan. 7 as the team hosts the Southern Arkansas University Tech Rockets in Mullen Gymnasium for a 7 p.m. tip.

The Wolves took the lead early, and much like the girls game before them, never gave it up the entire game. The Wolves fired a 12-1 early in the first fueled by free throws from Cameron Woodall and Miles Daniels. The run put the Wolves in a commanding 20-7 lead. The Wolves got even more momentum midway through the quarter with a three-pointer from Daniels, followed by a huge alley-oop to Woodall, and capped off with another three from Daniels. The quick unanswered eight points had the fans in Mullen Gymnasium on their feet as the Wolves upped their lead to 40-16.

The Dolphins chipped away at the Wolves for the final eight minutes of the opening half, but the teams mostly traded baskets. Going into the locker room the Wolves led by 17, 52-35.

The Dolphins came roaring back in the second half as turnovers and a lack of rebounding plagued the Wolves. With 11:43 remaining Delgado’s Louis Blakes hit a three to cut Co-Lin’s lead to nine, 63-54, the first single-digit lead since the opening six minutes of play. Damarius Brooks answered with a three-pointer for Co-Lin, but the momentum was short-lived as a 12-2 Dolphin run cut the lead back down to eight, 74-66, with just 6:16 remaining. The Dolphins continued to push as a jumper from Troy Nisby and a three-ball from Kai Morgan cut Co-Lin’s lead down to just three, 82-79 with 2:52 left in the contest. Two quick unanswered layups from Daniels and some impressive free throw shooting down the stretch from Xavier Heidlberg and Dajon Whitworth helped stretch the lead back to nine, 89-80, in the final minute and locked in the victory.

Miles Daniels led Co-Lin with 22 points on the day. Damarius Brooks added 17, Cameron Woodall poured in 12, and Dajon Whitworthscored 10 to round out Co-Lin’s top scorers. Kenna Bryant came off the bench to score nine and had a team-high seven rebounds. Xavier Heidelberg led the team with three steals.

Kendrick Dandy led the Dolphins with 18 points while Kai Morgan added 15. Morgan led the team in rebounds with eight.

BHS alum Brooks is MACJC Player of the Week

Copiah-Lincoln sophomore guard Damarius Brooks was recently named MACJC Player of the Week for his stellar play against Mississippi Delta and... read more