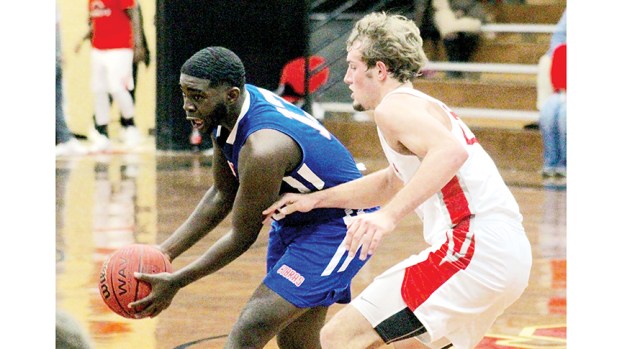 Photo by Katie Furr Dane Smith of Loyd Star pressures Darrian Gibson of Wesson in the first half on Tuesday night. Gibson would score 12 points in a 62-42 win.

The Cobras built a 19-5 first-quarter lead by using their lengthy and active half-court zone defense to shut down the Hornet offense. When Wesson trapped the ball in the corners, Loyd Star had problems finding the open man. Many of the Hornet turnovers came when skip passes from the corner sailed long due to the Wesson pressure.

Junior forward Kenner Bizot scored a season-high 19 points to lead the Wesson offense. Bizot has been on a hot streak of late, as he scored 18 points in each of the last two Wesson wins over North Pike and West Lincoln. The 6-foot-4 Bizot operates best around the free throw line area and did most of his damage on jumpers from there.

Wesson led 33-17 at halftime and had lapses of bad play in the third quarter when the game slowed down for both teams. Cobra coach Rusty Newman says he wanted a more deliberate pace from his team down in the second half and the Cobras got complacent for a stretch.

“I wanted us to slow it down some in the second half and our offense didn’t look as good during that time,” said Newman. “Our defense was working really well, and our guys were communicating and playing hard. Defensively we’re better this season.”

It was a frustrating night for a senior-laden Hornet team that started the season 4-0 but have gone 3-4 since. Loyd Star got plenty of good looks all night, especially close to the basket. Senior forward Zabien Price was strong on the boards for the Hornets, as the home team got plenty of second-chance scoring opportunities. The problem was it felt like there was a lid on the basket as the Hornets missed too many layups and put-back attempts.

Junior Darrian Gibson scored 12 points for the Cobras and J.D. Allen added 11 points. Allen says the Cobras are sharing the ball freely and trusting each other offensively.

“Everybody can score on our team and we don’t care who does it, just that it gets done,” said Allen.

One thing that Allen and his coach agree on is the Cobras must get better on the boards as they creep toward region play after Christmas.

“We’ve got to do a better job rebounding the ball as a team,” said Allen.

Newman says the Region 8-3A slate is filled with some full-grown men in the post.

“We play against teams in our region that have SEC defensive lineman in the paint,” said Newman. “If we don’t rebound the ball together then we’ll be in trouble when that time comes.”

BC, BHS, LC pick up sweeps on Tuesday