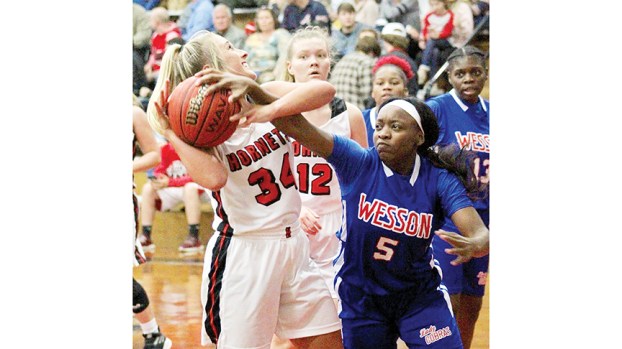 Photo by Katie Furr O’Koya Barlow of Wesson concentrates on trying to take the ball from Christie Patterson of Loyd Star under the goal on Tuesday night.

The Loyd Star Lady Hornets (6-6) looked like a team that is growing in comfort level and scheme on Tuesday night, as they jumped on the Wesson Lady Cobras (1-10) early and kept up the pressure on the way to a 57-22 home-court win.

First year Loyd Star coach Christi Terrell used full court pressure to cause turnovers and put Wesson in an early hole. Freshman point guard Aubrey Britt is out front on the press and is the player applying the initial pressure on most possessions. Long limbed and fleet of foot — she is the defending two-time 2A cross-country champion — Britt is a shadow on whomever she is guarding. Junior guard Carly Beth Wallace plays the role of traffic controller for the Hornet defense, as she usually directs things from the middle.

Tuesday night Wallace scored 10 points — all in the first half — and Britt added 10 points herself.

Offensively, the Lady Hornets try to get the ball in to senior center Sarah Britt early in their possessions. The four-out and one-in offense allows Britt to look for her teammates, who are all spotted up for set shots. Senior forward Christie Patterson says the Lady Hornets have worked hard to improve their offensive efficiency.

“We shoot the ball a ton in practice,” said Patterson. “That’s one of the things that coach Christi stresses the most. We’ve got to be ready to shoot and take shots we’re comfortable with.”

Terrell has recently said her team grows in confidence every game and that each night she sees an area in which her team improves.

Sarah Britt agrees with that analysis by her coach.

“We’re working together and there is no selfishness,” said Britt. “We’re getting more aggressive and going after the ball more.”

“At the beginning of the year I felt like we were too uptight,” said Patterson. “We had a new coach and new starters and we had to learn how to work together. We’ve got better understanding of each other now.”