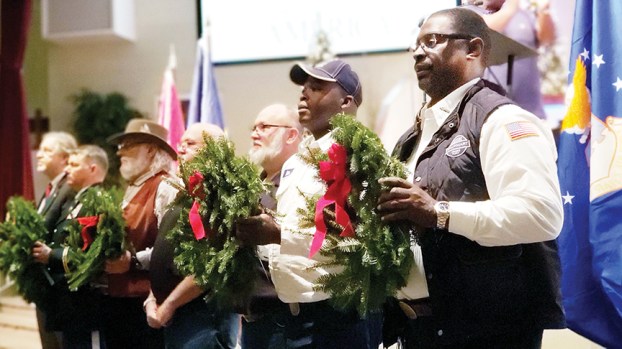 Thousands of wreaths pass through area

Two Brookhaven police officers killed in the line of duty and a soldier still missing decades after the Vietnam War were remembered Thursday in a wreath-passing ceremony as part of the 2018 Wreaths Across America program.

Mayor Joe Cox accepted a wreath to remember local veterans and heroes to be placed at the Lincoln County Veterans Memorial. Special recognition was given to officer James Kevin White and Cpl. Zach Moak of the Brookhaven Police Department who were shot to death Sept. 29 while answering a call.

“We want our veterans and our families of these officers to know we appreciate them. Today, we pay tribute to those protectors who have worn the uniform,” said organizer Terrance Turner, a Walmart Distribution Center transportation manager who served in the armed forces for six years.

Dozens of trucks are carrying thousands of wreaths from Maine to every state in the nation this week to be placed on graves of veterans Saturday. The wreaths at the ceremony Thursday at Easthaven Baptist Church came by way of Cullman, Alabama. Two brothers, from Cullman, Army veteran Allen Twilley and Navy veteran Homer Twilley, ceremoniously presented a wreath to Brookhaven drivers Ellis Coleman, a special forces Marine veteran, and Army veteran Ken Lewis.

Wreaths Across America aims to remember and honor the fallen through wreath-laying ceremonies at Arlington National Cemetery and more than 1,400 additional locations across the United States, at sea and abroad.

Walmart has been involved with the organization for the past 11 years, with more than 100 drivers carrying 100,000 wreaths across 40,000 miles this year.

Lewis and Coleman will take the seasonal cargo of 9,000 balsam wreaths to Opelousas, Louisiana, for a ceremony there and then to Texas, where they will be placed on graves at the National Cemetery in Houston.

“The wreaths are being driven with the utmost respect and care,” Turner said. “They will make sure that pride, honor and dignity will escort these wreaths to their final destinations.”

The trucks will be escorted by Patriot Guard Riders and state troopers from Mississippi, then Louisiana and Texas.

Several other wreaths were part of the ceremony. One wreath represents the Mississippi Highway Patrol and was accepted by Col. Craig Weaver of the Brookhaven High School JROTC.

Turner said 27 troopers have died in the line of duty since the state policing agency was formed in 1938.

Weaver also accepted a wreath to represent the armed forces to honor those currently serving and their families.

Charlie Hewitt accepted a wreath to be placed on a memorial marker for Capt. Danny Day Entrican, a Brookhaven native.

Entrican, a special forces reconnaissance patrol leader, was inserted into the Da Krong Valley in Thua Thin Province, South Vietnam on May 8, 1971. Entrican’s duty assignment in Da Nang was that of an advisor to the South Vietnamese army. His team consisted of three Americans and three Chinese Nung mercenaries. The team was overwhelmed in a firefight three days later about one mile from the border of Laos, Turner said.

During the firefight, two Americans and one Nung were killed. Entrican was wounded and didn’t make the chopper pickup because he wouldn’t leave a wounded teammate behind, Turner said.

Entrican was listed as missing in action and later as a prisoner of war.

“To this day Danny’s family still does not know his fate,” he said.

Turner said the wreath-passing ceremony represents the commitment of the United States to remember the fallen service men and women.

“We want these remembrance wreaths to symbolize our honor to those who have served and are now serving,” he said. “To our children, we want you to enjoy the freedoms you enjoy today and know they have come at a cost that someday you may have to repay also.”

Lunch was provided by Riverwood Family to the crowd of about 100 individuals, students and veterans.

Volunteers are needed to help with the wreath-laying ceremonies Saturday in Wesson. Cathy Stroud with Socks for Heroes MS is organizing ceremonies at several Copiah County cemeteries.

More than 190 wreaths will be placed at graves in Wesson Cemetery during a ceremony that begins Saturday at 11:30 a.m. Doty and Currie will speak at the event.

On Monday there will be a ceremony at Georgetown Cemetery at 10 a.m. Wreaths will be laid at Beauregard Cemetery at 3 p.m., but without a ceremony, Shroud said.

No one leaves the toy drive without a toy — maybe two or three toys. Members of Brookhaven’s St. Mark... read more