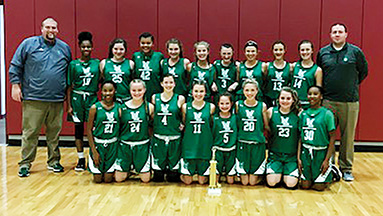 The unbeaten West Lincoln Lady Bears capped their season with a 49-18 win over Enterprise Thursday night in the Lincoln County Junior High Girls Tournament title game. The Loyd Star girls won the consolation game with a 49-24 victory over Bogue Chitto.

Creating turnovers and winning rebounds helped propel the West Lincoln girls to a big win in the finals and the end of their perfect season with an 11-0 record.

“I’m proud of the girls and what they accomplished this year,” said West Lincoln coach Brooks Smith. “It’s very hard to go perfect in any sport and we were able to do that. I appreciate all their hard work this year and if this group will stick together and keep working, the potential is there to do even bigger things in the future. We lost in the championship last year and their goal all year long was to win it this year.”