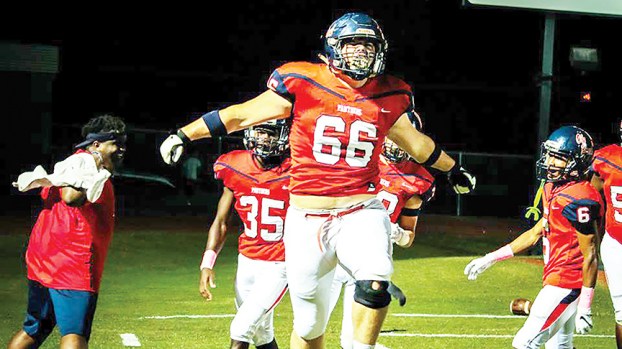 Photo by April Clopton Brookhaven High senior Coker Wright celebrates scoring a touchdown on a fumble recovery against Forest Hill. Wright suits up for Team Mississippi on Monday night at 6:30 p.m. in the Mississippi/Alabama All-Star Game.

The Brookhaven High senior isn’t at Camp Lejeune or Parris Island, he’s in Montgomery, Alabama practicing with his team for the Mississippi Association of Coaches’ Mississippi/Alabama All-Star Game.

Wright arrived in the Yellowhammer State on Wednesday and practiced with the team that evening. The coaches put them through two-a-day practices on Thursday and Friday. Saturday will see a single practice and Sunday will be a walk-through day. The game takes place on Monday, Dec. 17 at 6:30 p.m.

Wright calls playing in the game a dream come true and the realization of hard work. He also calls himself extremely sore.

“I’ve been blocking some of the best defensive lineman in the country for the last couple days, and I’m wiped out right now,” said Wright.

The 40-man Mississippi roster is loaded with future college stars. Wright says the defensive line is particularly nasty and he says Seminary defensive lineman Nathan Pickering is a full-time job to block.

“He’s a guy I’ve been working against in practice and if you aren’t ready, he’ll bust your tail every time,” said Wright. Pickering is listed at 6-foot-5 and 296-pounds. He is committed to Mississippi State.
When he was told that Wesson offensive lineman saw Pickering as a junior and senior when Seminary was a region mate of the Cobras, Wright replied with, “God bless them.”

Wright was a defensive lineman himself this season for Brookhaven High School. This week he’s back on the offensive line and is currently working with the first team at left guard.

“I think we’re strong on both sides of the line,” said Wright. “I know a lot of times with All-Star games people don’t think things are physical, but we’ve been in pads and busting heads. We’re ready for contact.”

Wright says he’s heard the Alabama team is equally loaded, but they have some players that have elected to skip the game.
“I’ve heard they have a couple guys that graduated early and are practicing with the University of Alabama in their bowl game prep,” said Wright. “I expect it to be a close game, there is a lot of pride and bragging rights that go along with this game.”

Last season, Team Mississippi dominated the second half on their way to a 42-7 victory. Alabama holds a 22-9 lead in the series, but the game has almost exclusively been played on their turf. Mississippi is 2-0 in Hattiesburg, the site of last year’s game. Former Brookhaven High coach Tommy Clopton and Panther alums Jeffery Johnson, J.J. Jones and Trace Clopton were all part of the victorious 2017 Mississippi team.

A banquet to honor the teams takes place on Sunday night. On Monday, the 32nd annual game takes place at the Cramton Bowl in Montgomery. WLBT in Jackson will broadcast the game, as will WDAM in Hattiesburg and five other stations around the state.

Next week, Wright will seal his collegiate future when he signs a scholarship with the University of Southern Mississippi. For his last high school football game, he wants to be part of a second straight Mississippi victory.

“It’s a real honor to be on this team,” said Wright. “You look around at how talented the guys on this team are and it sinks in a little more. I want to play my best on Monday night and help us bring a win home.”

Cross-country has taken Jonathan Mathis over countless miles of woods, trails, and roads throughout Southwest Mississippi since he began competing... read more