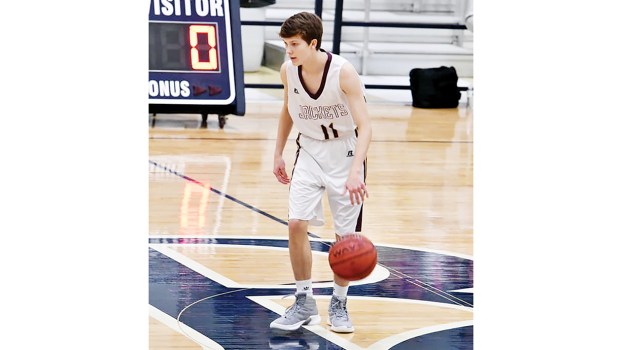 Photo by Stacy Leake Sophomore point guard Hib Johnson scored six points and handed out seven assists for Enterprise Friday night in a 56-53 loss to Salem. Johnson and the Yellow Jackets play their final game before the Christmas break on Friday night when they travel to Lumberton.

Enterprise comes up 3 short vs. Salem

It was a close game from the tip on Friday night but in the end, it was the Salem Wildcats (2-7) who were able to edge the Enterprise Yellow Jackets (4-7) 56-53 in high school boys’ basketball action.

The first half would see the Wildcats control the boards and create more turnovers as they ran out to a quick start. The second half would feature several ties and lead changes, with Salem getting a small edge toward the end of the game.

“I thought the boys played hard,” said Enterprise coach Shane Adams. “We missed some shots that we normally make. They did a really good job competing and staying in the game. Salem is a lot better than they have been in the past. Their 6-foot-4 senior forward Hunter Willett hurt us on the boards. Overall, I thought the kids gave a great effort. We were in the game until the end.”

Salem began the game on an 8-0 run before Taylor Presley of Enterprise put his team on the scoreboard.

Down 12-2 towards the middle of the first, Enterprise would start to cut into Salem’s lead with a three-pointer by Peytin Jergins and Dylan Carter knocking down two charity shots.

Coming out of halftime, Enterprise’s Austin Fugler would net a three-pointer from the left side to give Enterprise their first lead of the game.

The lead didn’t hold long, as Salem quickly took back the spot off a bucket by Dequarrious Redmond.

Both teams would trade baskets for the rest of the third, with Salem taking a 43-38 lead into the final frame.

Jergins closed up the gap in the fourth when he hit a jump shot and completed his plus-one play after picking up a foul, making the Salem lead one-possession, 43-41.

Driving down the side of the court, Presley would soon tie up the game, only to see the Wildcats net to quickly take the lead back.

The Yellow Jackets would once again tie up the game as Carter drove inside the lane for his jump shot.

The Wildcats prevented the game from being tied as Redmond scored a bucket and completed his plus-one play.

With just two minutes left in the game, Salem held onto a one-point, 50-49, lead.

Down 53-49 with just thirty seconds remaining in regulation, Enterprise fought hard to either force over time or pick up the win, but time ran out before they could do either.

Enterprise wraps up their pre-Christmas schedule with a trip to Lumberton on Friday.