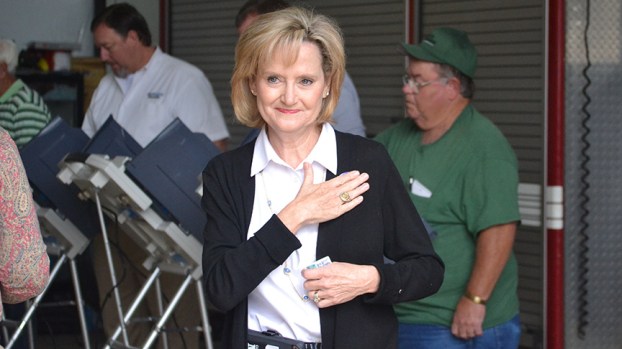 A Brookhaven cattle farmer sworn in Monday to complete the Senate term of former U.S. Sen. Thad Cochran became the first woman from the Magnolia state to be elected to Congress.

It’s the second time U.S. Sen. Cindy Hyde-Smith, a Lawrence County native, has been sworn in to the Senate. She was appointed by Gov. Phil Bryant in April to temporarily succeed the retired Republican senator.

“It is a great honor to serve Mississippi as a United States senator,” she said. “I am committed to doing everything I can to represent the priorities of all Mississippians, and will continue to work to advance the needs of our state and the nation.”

The former Mississippi Commissioner of Agriculture and Commerce took the oath of office administered by Orrin Hatch (R-Utah), president pro tempore of the Senate, shortly after the Senate gaveled into session on Monday. Hyde-Smith defeated Democratic challenger Mike Espy, a former congressman and former U.S. agriculture secretary who was trying to become the state’s first African-American senator since Reconstruction.

As the winner of that Nov. 27 special election runoff, Hyde-Smith will finish the final two years of the six-year term Cochran started.

Since assuming office, Hyde-Smith has served on the Senate appropriations, agriculture, and rules committees.

Hyde-Smith is the first woman elected to represent Mississippi in either chamber of Congress.

Shortly after the win, President Trump tweeted: “Congratulations to Senator Cindy Hyde-Smith on your big WIN in the Great State of Mississippi. We are all very proud of you!”

Zack DeLaughter dropped the board on the saw horses and pulled the tape on down the length of the pine.... read more