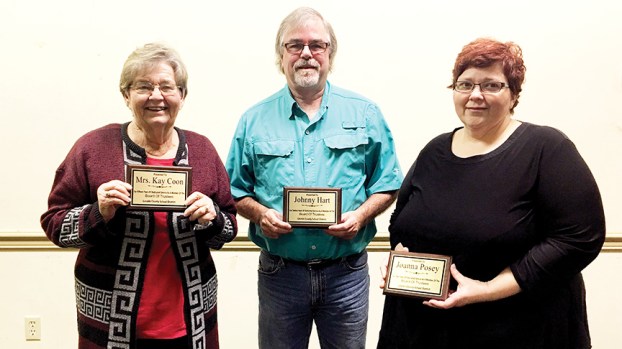 Photo by Adam Northam Outgoing Lincoln County School District Board of Trustees members Kay Coon, Johnny Hart and Joanna Posey were presented with service plaques at the conclusion of Monday night’s board meeting, the last of the year. Pictured are, from left: Coon, Hart and Posey.

Lincoln Co. School Board members’ service at an end

When Monday night’s meeting of the Lincoln County School Board ended, Kay Coon, Johnny Hart and Joanna Posey stepped down for the last time, taking 29 years of board experience out the door with them.

Or maybe it was 49 years. It depends on when Coon’s service really began.

“To be honest, when your spouse is a board member, you’re a board member — (the late) Jerry Coon first came on the board in 1983, so really, Mrs. Kay has been a board member for 35 years, not 15,” said Superintendent Mickey Myers. “There comes a time when we pass the torch to someone else. We trust our new members will have the same level of dedication these members have had.”

It was a touching moment when Myers handed out service plaques to each of the three outgoing members, but any solemnity was quickly driven away by applause, hugs and handshakes, and a year-end meal of chips and chicken fingers, as the Lincoln County School District Board of Trustees concluded its business for the year and said goodbye to Coon, Hart and Posey.

Coon decided not to seek reelection in 2018 after serving on the board since 2003 — and serving along with the board since 1983 — and will be replaced by U.S. Coast Guard technology specialist Justin Laird, who ran unopposed. Hart was defeated in the November elections by incoming District 2 trustee and former Loyd Star coach Billy Vaughn, and Posey lost her District 5 race to physical therapist Tim Cunningham.

Hart had served on the board for 12 years, and Posey had served two years after being appointed to fill the term of her father-in-law, Michael Posey, who resigned.

It was a tough year for a school board incumbent to win reelection — the board has been criticized for appointing members in place of elections after its election schedule got off-track years before, for falling state test scores and for proposing numerous sports facility upgrades.

District 3 trustee and board President Diane Gill will be the only returning member in 2019, after new member Brian Magee was appointed to fill in for the resigned Ricky Welch.

“In the time I’ve been superintendent, we’ve had a lot of controversy. Social media fuels these things,” he said. “A year or so back we had a public records request to see what kind of money (board members) get, and when we gave it to them, they didn’t believe us. You can’t do this job for the money. You do it for the children.”

In parting, Coon said she was thankful for the opportunity to serve on the board so long.

Hart said the dozen years he spent on the board were a “blessing.” He spoke with his arms full of granddaughter — Embry Hester, 5, a Loyd Star kindergartener. After the meeting, she called him “Poppa” and jumped up into his grasp.

“There were good times, and not-so-good times, but I wouldn’t change a thing,” he said. “I’m just proud of being able to play a part for our students.”

Posey was joined by her husband, Jeff Posey, an associate vice president at Alcorn State University, and her two children, Claire and Justin, both accomplished 4H and FFA livestock exhibitors and Dixie National veterans.

“I appreciate the opportunity to have participated in the process, and I look forward to watching the continued growth and improvements in our schools,” she said. “I appreciate our teachers and administrators for their heart and hard work.”

Don’t get Grinched at holiday season

Brookhaven’s police chief would like to see a few Grinches get pinched while curbing package thefts. “People seek out opportunities... read more